Gleanings from Books, on Agriculture and Gardening 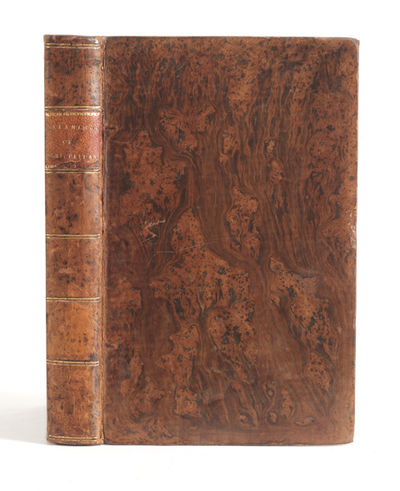 by [YOUNG, Arthur]
Two engraved plates. 4, vii, [1], 432 pp. 8vo, cont. polished tree calf, flat spine gilt, red morocco lettering piece on spine. London: W. Smith, 1802. "Second edition, enlarged and improved" (1st ed.: 1801) of this compendium of agricultural advice extracted from various works including Marshall's Rural Economy, Hunter's Georgical Essays, and Curtis's Practical Observations on the British Grasses. Young (1741-1820), "was not only the best-known agricultural reformer and publicist of his time, with an international reputation, but also a figure of importance in the political and social issues of the day. He had an extraordinary capacity for work...In an age of hazardous roads he travelled many thousands of miles, a high proportion of them on horseback or on foot, and he still found energy to write up his day's notes and perhaps some letters in his inn room at night. Some modern historians have criticized his agricultural work and have compared him unfavourably with his rival, William Marshall, but it is often overlooked that their approaches were different: Marshall gave an account of the farming of a region as a whole, while Young was not concerned with presenting a rounded picture of contemporary farming; his interests lay entirely in reporting on new advances and condemning old and inefficient methods. His enthusiasm often led him into hyperbole, but he was realistic in appreciating that farmers would only take up what could be shown to pay. Some of his own experiments were misconceived, but in his day the true factors in plant growth were far from understood. As a pioneering scientific spirit he was very widely respected, and his knowledge, wit, and pleasant personality made him welcome in both aristocratic mansion and modest farmhouse."-ODNB. A very fine and handsome copy. (Inventory #: 2756)
$950.00 add to cart or Buy Direct from
Jonathan A. Hill, Bookseller
Share this item
Jonathan A. Hill, Bookseller, Inc.
Offered by