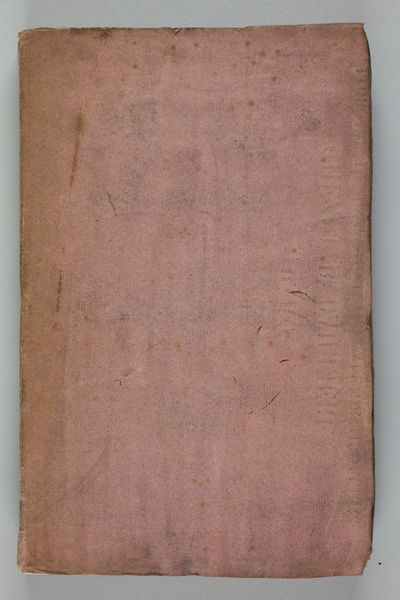 by HAÜY, René-Just
Three folding engraved plates. xvi, xxii, 253 pp. 8vo, later pink wrappers (minor foxing or browning). Paris: Courcier, 1817. First edition. The French petrographers were far more interested in the mineralogical composition and structure of rocks, without respect to their mode of occurrence, their age, or their origin. It was Haüy who laid the foundation of the mathematical theory of crystal structure. In this work he applied it to the analysis and classification of precious stones. "Very scarce. A landmark book in the science of gemology, described by Sinkankas (1994) as 'the first determinative gemology worthy of the name.' This book marks a transition from earlier descriptive lapadaries to works based on scientific studies. The volume describes the crystallography and physical properties of various gemstones, and characterizes how these qualities might be used in identifying a stone, whether rough or cut. To facilitate this an identification table is provided. The three plates show various crystal forms, a Nicholson's hydrometer (used for measuring specific gravity) and other laboratory apparatus for testing electrical properties."-Schuh, Mineralogy & Crystallography: A Biobibliography, 1469 to 1920 (in progress), 2128. In the Introduction, Haüy refers to Henry Philip Hope, the buyer of the blue diamond of supposed sinister influence known by his name. Very good copy. ❧ D.S.B., VI, pp. 178-83. Partington, IV, p. 203. (Inventory #: 3469)
$2,500.00 add to cart or Buy Direct from
Jonathan A. Hill, Bookseller
Share this item
Jonathan A. Hill, Bookseller, Inc.
Offered by


(click for more details about Cy Twombly [Merve No. 113])
View all from this seller>