Bibliothecae Bridgesianae Catalogus: or, a Catalogue of the Entire Library of John Bridges, Late of Lincolns-Inn, Esq; Consisting of Above 4000 Books and Manuscripts in all Languages and Faculties; particularly in Classics and History; and especially the History and Antiquities of Great-Britain and Ireland: which will begin to be sold by Auction on Monday the seventh Day of February 1725/6, at his Chambers in Lincolns-Inn, No 6 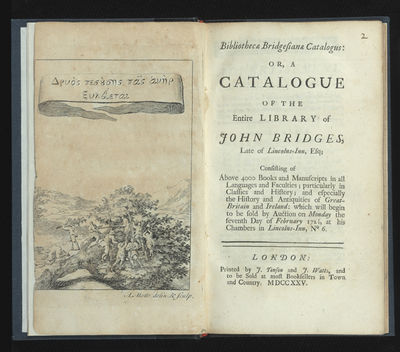 by (AUCTION CATALOGUE: BRIDGES, John)
Engraved allegorical frontis (slightly cropped at outer margin). 3 p.l. (incl. frontis.), 199 pp. 8vo, attractive blue morocco-backed boards, spine lettered in gilt. London: Printed by J. Tonson & J. Watts, 1725/26. The English issue of the sale catalogue of the library of John Bridges (1666-1724), historian of Northamptonshire. Bridges left his fine library to his two brothers, who prepared an inventory catalogue in 1725 for sale. Their efforts were apparently fruitless as the books were sent to auction before the year was out. There are two issues of the present auction catalogue: the English issue with the title in English and a frontispiece, and a second issue with two title-pages, one in Latin and another in French. The continental issue was prepared in order to attract bids from dealers and collectors from Europe. It is generally not recognized that attempts were made by English auctioneers in the early 18th century to generate business from the Continent. Dibdin called Bridges "a notorious book-collector." The library contained over 4000 books and MSS. It was notably rich in the history and antiquities of Great Britain and Ireland. There was a scandal surrounding the sale as Bridges's two brothers were quite obviously bidding up the books. Humphrey Wanley, who was a buyer at the sale for Robert Harley's library, described the sale as "very knavish." A very good and crisp copy. ❧ D.N.B., II, pp. 1229-30-"the catalogue of his library was long retained as valuable by curious collectors." Fletcher, English Book Collectors, pp. 156-58. See Pollard & Ehrman, p. 212, Table XXV, & no. 222 for the inventory catalogue of earlier in the same year. Taylor, Book Catalogues, pp. 193 & 206. (Inventory #: 2799)
$1,500.00 add to cart or Buy Direct from
Jonathan A. Hill, Bookseller
Share this item
Jonathan A. Hill, Bookseller, Inc.
Offered by