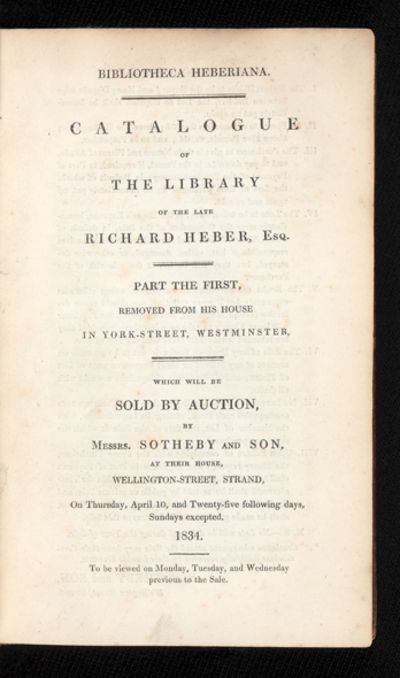 by (AUCTION CATALOGUE: HEBER, Richard)
16 vols. bound in 6. 8vo, cont. patterned cloth (Vols. 1-13), modern cloth (Vols. 14-15), & orig. wrappers (Ghent sale). London: Sotheby, Evans, or Wheatley (Vols. 1-13), Paris: Silvestre (Vols. 14 & 15), & Ghent: Ch. Citerne, 1834-37. The auction catalogues of the library of Richard Heber are very rare; this set is complete and includes the very rare Ghent catalogue of 26 Oct. 1835. "The Dibdinian age may be aptly said to terminate with the dispersal of the gigantic library accumulated by Richard Heber (1773-1833), a bibliomaniac if ever there was one...From 1800 to 1830, he purchased at every London sale, either in his own name or through agents like Triphook and Thorpe. He thought of nothing of securing whole libraries at a time. When he died, his books filled two houses in London, one at Hodnet, one at Oxford, one at Ghent and one at Paris, not to speak of smaller stores at Brussels, Antwerp and other Continental cities. The total number of volumes in his library must have been between two and three hundred thousand, and it is doubtful whether any private individual has ever owned so large a library... "The dispersal of the Heber library took no less than sixteen sales, thirteen in London by Evans, Sotheby and Wheatley, two in Paris and one in Ghent...The Heber catalogues, although badly compiled and arranged in the most inconvenient manner, are daily consulted by every bibliographer... "Heber's library, although it contained books of every description and in every language, was especially strong in literature and in history. His series of Continental books, early Italian and Spanish works, later Latin poetry, humanistic treatises of the Renaissance, were unrivalled. He owned a very large number of early French books... "The real strength of Heber's library was, however, in the field of early English literature, especially poetry and the drama. For thirty years he collected systematically and purchased nearly every item which came on the market."-De Ricci, pp. 102-04. Fine set from the library of E.P. Goldschmidt. ❧ Gustave Brunet, Dictionnaire de Bibliologie Catholique, cols. 469-70 & 566-68. (Inventory #: 2811)
$13,500.00 add to cart or Buy Direct from
Jonathan A. Hill, Bookseller
Share this item
Jonathan A. Hill, Bookseller, Inc.
Offered by