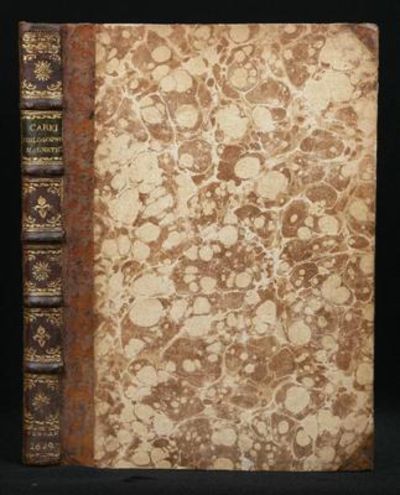 by CABEO, Niccolo
Engraved title & several engravings & numerous woodcuts in the text. 8 p.l., 412, [12] pp. Folio, cont. half-sheep & marbled boards (minor worming towards end), spine gilt, black leather lettering piece on spine. Ferrara: F. Succius, 1629. First edition, Jesuit issue, and a very fine copy. "Perhaps the most significant discovery of the century following Gilbert was that of electrical repulsion. This effect seems first to have been noticed incidentally by Cabeus, who, in his Philosophia Magnetica (1629), describes how filings attracted by excited amber sometimes recoiled to a distance of several inches after making contact."-Wolf, A History of Science, Technology, and Philosophy, I, p. 303. Cabeo also relates his many experiments on the possibility of telegraphic communication by means of magnetized needles and gives the first picture of the sympathetic telegraph, an imaginary magnetic telegraph which sometimes appeared in early electrical literature, fancifully prefiguring the actual telegraph. It was supposed to operate by synchronous activation of two instruments with alphabetic dials whose needles had been magnetized by the same magnet. Cabeo (1586-1650), taught theology and mathematics in Parma for many years until he settled in Genoa where he taught mathematics. Handsome and large copy. There are three issues (no priority) of this book: the first issue has a royal coat-of-arms at the head of the title; the second issue has the coat-of-arms replaced by the Jesuit emblem; and the third was produced for export to Germany and has an added printed title with a Cologne imprint. ❧ Ferguson, I, p. 136. Neville, I, p. 232. Riccardi, I, 205-06. Wheeler Gift Cat. 97-"the first recognition of electrical repulsion.". (Inventory #: 1470)
$15,000.00 add to cart or Buy Direct from
Jonathan A. Hill, Bookseller
Share this item
Jonathan A. Hill, Bookseller, Inc.
Offered by


(click for more details about Cy Twombly [Merve No. 113])
View all from this seller>