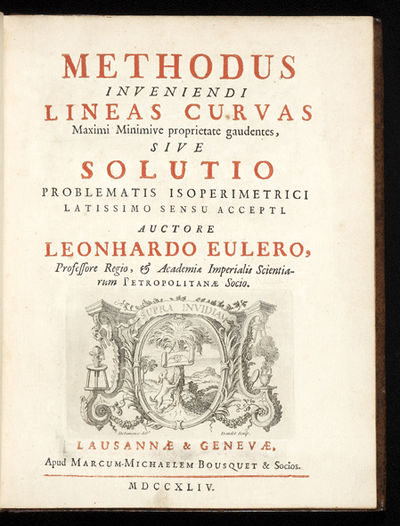 by EULER, Leonhard
Engraved vignette on title & five folding engraved plates. Title in red & black. 1 p.l., 322 pp., 1 leaf of instructions to binder. Large 4to, cont. mottled calf (foot of upper joint carefully repaired), spine richly gilt, red morocco lettering piece on spine. Lausanne & Geneva: M.M. Bousquet, 1744. First edition of the work which created the calculus of variations. This book, which displayed "an amount of mathematical genius seldom rivalled, contained his researches on the calculus of variation to the invention of which Euler was led by the study of the researches of Johann and Jakob Bernoulli...The study of isoperimetrical curves, the brachistochrone in a resisting medium and the theory of geodesics, previously treated by the elder Bernoullis and others, led to the creation of this new branch of mathematics, the Calculus of Variations. His method was essentially geometrical, which makes the solution of the simpler problems very clear."-Cajori, A History of Mathematics, p. 234. Fine large copy from the library of Haskell F. Norman with bookplate. ❧ Dibner 111. D.S.B., IV, p. 479. Evans, First Editions of Epochal Achievements in the History of Science (1934), 9. Horblit 28. Roberts & Trent, Bibliotheca Mechanica, p. 104-"For the purposes of mechanics, the significance of this work lies in the appendix, which deals with geometrical forms of elastic curves...The present work illustrates the first solution to the problem of the buckling of a column." Sparrow 60. (Inventory #: 3520)
$12,500.00 add to cart or Buy Direct from
Jonathan A. Hill, Bookseller
Share this item
Jonathan A. Hill, Bookseller, Inc.
Offered by