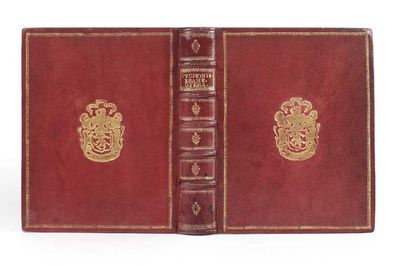 by BRAHE, Tycho
Large woodcut printer's device on each title & numerous woodcuts & illus. and printed tables in the text. 470, [7] pp., one blank leaf; 217, [1] pp., two leaves of dedication. Two parts in one vol. Large 4to, cont. binding from the south of France of red morocco (rather browned throughout as always with this book due to the quality of the paper, some minor worming towards end touching a few letters & carefully repaired), arms in gilt on covers of François de Rignac (1580-1663; see below), roulette border in gilt round sides, spine gilt. Frankfurt: J.G. Schönwetter, 1648. First edition of this collection of writings on the famous new star of 1572-74 (first part) and the equally famous comet of 1577 (second part); this edition, containing two of Tycho's most important works, is rare on the market. It was his observations of these two astronomical phenomena - here printed - that compelled Tycho to abandon the Aristotelian theory of the universe and replace it with his own geoheliocentric system. This was an enormously important step in the acceptance of the Copernican doctrine. Many of Tycho's instruments - sextants, quadrants, and various armillae - are well-illustrated here. This copy belonged to François de Rignac (1580-1663), attorney general of the Cour des Aides de Montpellier and bears his arms on the red morocco covers (Olivier-Hermal-de Rotton, pl. 1902). The binding of this superb copy is typical of the workshops of the south of France, especially that of Corberan, the binder for Peiresc. Though François de Rignac married a certain Jeanne de Fabry in 1627, she was apparently not closely related to Nicolas Fabri de Peiresc, a native of Aix, even though this copy could imply family ties. In 1682, according to Léopold Delisle, Colbert received a gift of one hundred and four manuscripts of Mr. de Rignac, councilor to the Cour des Aides de Montpellier and heir to the books of François de Rignac. In their Histoire du Languedoc Vic and Vayssète relate that in 1677, Étienne Baluze had already discovered the library of the "late Mr. de Rignac." It is most unusual to see this book is such a fine contemporary binding. In this copy, the two leaves with the dedication are bound, as is often the case, at the end of Part II (like the Harvard copy). Preserved in a box. ❧ Houzeau & Lancaster 2704. For de Rignac, see Guigard, II, p. 413. (Inventory #: 5134)
$65,000.00 add to cart or Buy Direct from
Jonathan A. Hill, Bookseller
Share this item
Jonathan A. Hill, Bookseller, Inc.
Offered by


(click for more details about Multiple World: An International Survey of Artists' Books)