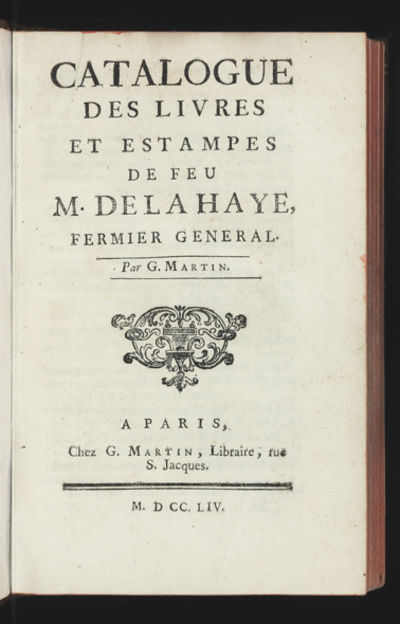 by (AUCTION CATALOGUE: LA HAYE DE FOSSÉS, Marin de)
xii, 396 pp. 8vo, cont. mottled calf, spine gilt, red morocco lettering piece on spine. Paris: G. Martin, 1754. A rare sale catalogue of the library of a Fermier général. According to the Preface by Gabriel Martin, La Haye (1684-1753) was a son of one of the Sécretaires du Roi; he became a Fermier General in 1718 and served in this capacity until his death in 1753 at the age of sixty-nine. He was extremely successful and acquired the Hôtel Lambert from the Marquis du Châtelet in 1745 and lived there in great luxury with a large staff. He formed one of the major collections of paintings of the time and his library was considered to be one of the best when compared to those of his contemporaries. For obvious reasons, the collection was strong in works on finance, French history, and government. The first 3547 lots describe the books, lots 3548-3620 the prints and illustrated books, 3621-3708 maps and atlases, 3709-88 a marvelous collection of engraved and printed music, 3789-97 books ordered by subscription, and 3798-3820 a supplement of books. This is one of twenty-two catalogues by Martin with an index. Fine copy, priced throughout in a contemporary hand. From the library of Jean Viardot. ❧ Grolier Club, Printed Catalogues of French Book Auctions...1643-1830, 115. Lugt 855. Peignot, p. 106. (Inventory #: 3359)
$3,250.00 add to cart or Buy Direct from
Jonathan A. Hill, Bookseller
Share this item
Jonathan A. Hill, Bookseller, Inc.
Offered by