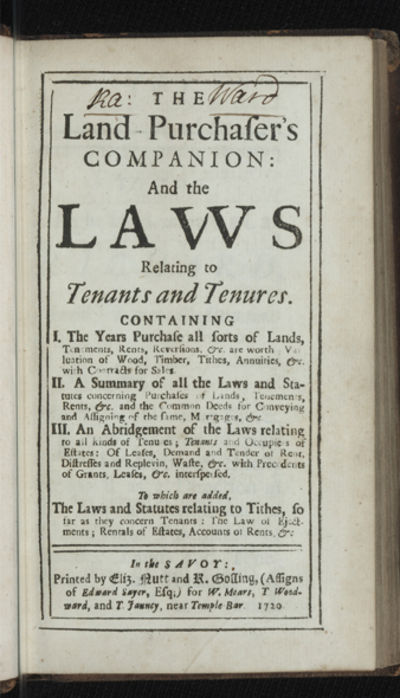 by [JACOB, Giles]
Title within double-ruled border. xi, 283, [15] pp., one leaf of ads. Small 8vo, later sheep (neatly rebacked, some faint browning), red morocco lettering piece on spine. "In the Savoy" [London]: printed by Eliz. Nutt and R. Gosling, 1720. First edition and very scarce on the market. Jacob (1686-1744), legal and literary author (including much pornography), is best known for The Country Gentleman's Vade Mecum (1717). After serving an apprenticeship to the law, he became Secretary to the Hon. W. Blathwayt, a celebrated courtier in the reign of William and Mary. Jacob, a land-owner with a keen interest in farming, was prompted to write the present work "as a companion to the purchaser...to render every thing plain and intelligible, that persons of all capacities may be enabled to judge when they are secure, and faithfully dealt with by the practisers of the law, in everything that shall commonly occur" (pp. viii-ix). He cautions, topically, "on the late flourishing business in Exchange Alley, occasion'd by the great rise of the South-Sea Stock, such extraordinary fortunes have been acquir'd by merchants and others, that the immediate value of lands...is considerably advanc'd, even to thirty five and forty years purchase, near the city of London; but this cannot be expected to be a standard rule for the future, or to times in general" (p. xi). Jacob also experimented with satire in The Rape of the Smock, published in 1717, a scatological parody of Alexander Pope's The Rape of the Lock. Pope later retaliated in the 1728 edition of The Dunciad (see ODNB). Early signature of "RA Ward" on title. (Inventory #: 2713)
$1,500.00 add to cart or Buy Direct from
Jonathan A. Hill, Bookseller
Share this item
Jonathan A. Hill, Bookseller, Inc.
Offered by