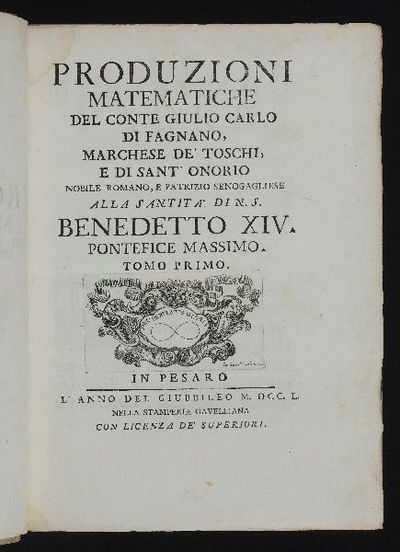 by FAGNANO, Giulio Carlo, Conte di, Marchese de'Toschi
Engraved vignettes on titles depicting the lemniscate & 16 folding engraved plates. xxiv, 528 pp.; xii, 536 pp. Two vols. Large 4to, mid-19th cent. half-vellum & marbled boards (occasional minor stains), entirely uncut. Pesaro: Stamperia Gavelliana, 1750. First edition of a rare work, containing the important collected writings of Fagnano (1682-1766), Italian nobleman and mathematician. Many of the texts printed here appear for the first time. Fagnano's advances in algebra and geometry were very far-reaching and his work on the rectification of the lemniscate made him, according to Legendre, the true founder of the theory of elliptic functions. This breakthrough was of great importance and was employed in the recent proof of Fermat's last theorem. "In algebra Fagnano suggested new methods for the solution of equations of the second, third and fourth degrees. He also organized in a rational manner the knowledge that scientists had of imaginary numbers, establishing for them a special algorithm that was far better than BombeIli's primitive one... "In geometry Fagnano formulated a general theory of geometric proportions that is more noteworthy than the countless writings, published previously, that were intended to illustrate book V of Euclid's Elements. Much more important, however, is his work on the triangle, for which he may well be considered the founder of the geometry of the triangle... "'The most important results achieved by Fagnano, however, were in analytical geometry and in integral calculus."-D.S.B., IV, pp. 515-16. "In his study of the rectification of the lemniscate, Fagnano introduced ingenious analytic transformations that laid the foundation for the theory of elliptic integrals and his work was to lead to elliptic functions. Fagnano collected many of his published works, and a few unpublished ones, and produced the two volume treatise Produzioni matematiche in 1750. In 1751 Euler was asked to examine Produzioni matematiche and he found in this treatise relations between special types of elliptic integrals, that express the length of an arc of a lemniscate, which were quite unexpected to him. Generalising Fagnano's results, Euler went on to create a general theory of these integrals, in particular giving the famous addition formula for elliptic integrals. Fagnano had proved the duplication formula, a particular case of the addition formula, for the integrals... "In fact Fagnano had proved remarkable properties of the lemniscate, including the fact that its arcs may be divided in equal parts using a ruler and compass construction... "Fagnano made many other major contributions but his mathematical work was not without controversy. He was involved in priority disputes with Nicolaus (I) Bernoulli and, not surprisingly, the big dispute of the day which was between the supporters of Newton and those of Leibniz."-The MacTutor History of Mathematics Archive (on-line). (Inventory #: 2378)
$9,500.00 add to cart or Buy Direct from
Jonathan A. Hill, Bookseller
Share this item
Jonathan A. Hill, Bookseller, Inc.
Offered by