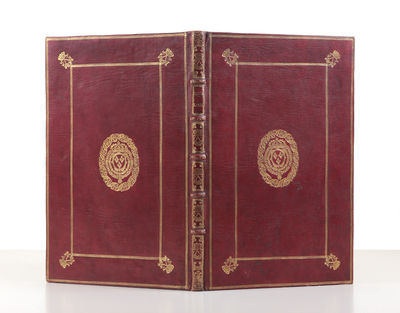 by CABINET DU ROI, Paris
Woodcut royal arms on title. 1 p.l., 34 pp. Small folio, cont. French red morocco, panelled in gilt in the style of the "cabinet du Roi," gilt arms & ciphers [Olivier 2495 fer 2] on covers, with ciphers on spine, a.e.g. Paris: de l'Imprimerie Royale, 1743. First edition and very uncommon. This catalogue, the splendid Han Fürstenberg - Otto Schäfer - Jacques Bemberg copy, lists the plates made of the collections of the king, including paintings, medals, royal chateaux, fountains, grottoes, statues, busts, tapestries, and jewels, along with records of festivals, entrances, battles, etc., etc. "Colbert, understanding that engraving was the best means to disseminate and preserve knowledge of the undertakings of Louis XlV, began to assemble a group of outstanding engravers. By 1660 they had achieved the stature of independent artists and by 1670 had become a special group under the protection of the king, joined together at the Gobelins around Charles Le Brun and Sebastien Le Clerc. From 1660 André Félibien was charged with providing descriptions of maisons royales and Adam Van der Meulen and Israel Silvestre were sent to the newly conquered territories to make views of the principal chateaus and fortresses. Other commissions for the Cabinet du Roi included engravings by Chauveau of the king's paintings at the Tuileries; copies of paintings and sculpture by Claude Mellan, Rousselet, and Audran in the galleries of the king; copies by Ronelet of the king's collection of medals; and other works of art and architecture by Rousselet, Silvestre, Chauveau, and Le Clerc. At the same time the Académie des Sciences began scholarly works commissioned by Colbert...Illustrators for these works were Abraham Bosse, Sebastien Le Clerc (who often made engravings for Claude Perrault), Nicolas Bailly, and L. de Châtillon... "From 1670 Colbert determined to join these engravings in a collection. He proposed that at the end of each year a temporary volume would be composed of all types of works, with the text printed in French and Latin. At the end of ten or twelve years the collection would be subdivided by topics, so that the king would have volumes separated into all the sciences and achievements of his reign... "A complete record of the king's possessions was never achieved, but the plan was continued by his successors. The engravings from the Cabinet du Roi were first published in a variety of sizes, and separately. They were then collected into volumes, according to Colbert's plan, but sporadically. In 1727 a new edition was published with additional plates and a catalogue. A third edition of twenty-three volumes with further additions and an index was issued in 1743. Later sets were formed with plates from various editions. The plates survive to the present day at the Chalcographie du Louvre."-Millard, French Books, 46. This catalogue was issued as a guide to the contents of the fifty sets of 956 plates of the 1743 edition, which were prepared as gifts (see Balayé, La Bibliothèque Nationale des origines à 1800, pp. 226-27). Fine copy. (Inventory #: 3702)
$40,000.00 add to cart or Buy Direct from
Jonathan A. Hill, Bookseller
Share this item
Jonathan A. Hill, Bookseller, Inc.
Offered by


(click for more details about Arguments)
View all from this seller>