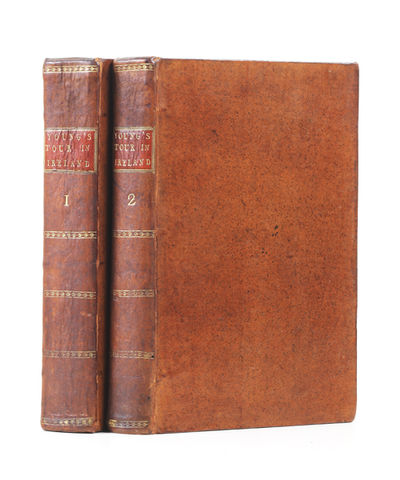 by YOUNG, Arthur
Five engraved plates (three are folding) & one woodcut in the text. 1 p.l., xxiv, 539, [1] pp; 1 p.l., 416 pp. Two vols. 8vo, cont. speckled calf, flat spines gilt, red morocco lettering pieces on spines. London: H. Goldney for T. Cadell, 1780. Second edition (the first edition appeared earlier in the same year) and a handsome set. This work "was well received at the time, and has since become a valuable source as one of the few accounts of conditions in Ireland at this time. Among other subjects Young had much to say on commercial policy and the activities of the Dublin Society; and in addition Young attacked the practice of subletting land to middlemen and made some interesting observations on the living conditions of the poor."-ODNB. Fine set. (Inventory #: 2755)
$1,500.00 add to cart or Buy Direct from
Jonathan A. Hill, Bookseller
Share this item
Jonathan A. Hill, Bookseller, Inc.
Offered by