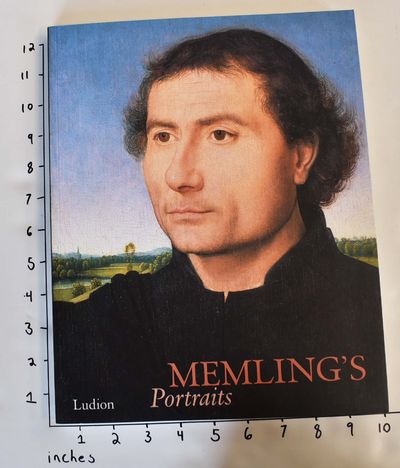 by Calster, Paul van (Editor)
Ghent: Ludion, 2005. Softcover. NF but for very faint age toning to page fore edges; unbroken spine.. Dark green illus. wraps with salmon lettering; French flaps; 191 pp. with 110 color and bw figures throughout the text, followed by 34 full-page color plates, followed by the catalogue of 28 color illustrations. Includes extensive descriptive text in the catalogue and four thorough essays about the artist and his work; with appendices. The catalogue was published to accompany the exhibition "Memling's portraits", Museo Thyssen-Bonemisza, Madrid 15 February - 15 May 2005, Groeningemuseum, Bruges 7 June - 4 September 2005, The Frick Collection, New York 6 October - 31 December 2005. Contents as follows: Memling-life and work / Till-Holger Borchert -- Memling and the Netherlandish portrait tradition / Lorne Campbell -- Memling and the European Renaissance portrait / Paula Nuttall -- Minimal means, remarkable results / Maryan W. Ainsworth. "This illustrated appraisal of every one of Hans Memling's portraits illuminates the artist's extraordinary craftsmanship while exploring in depth the function of portraiture in the Netherlands during the fifteenth century." "Published to accompany a major touring exhibition, this catalogue provides a lavish overview of Memling's career, with a selection of some thirty portraits by the master and his school, including portrait-wings from diptychs and triptychs along with autonomous panels of individual patrons."--Jacket. (Inventory #: 109850)
$29.97 add to cart or Buy Direct from Mullen Books
Share this item