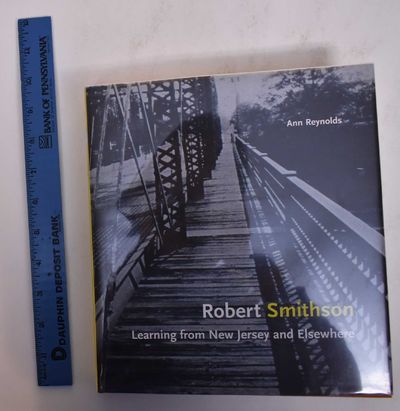 by Reynolds, Ann Morris
MIT Press, 2003. Hardcover. VG/VG (one small stain at bottom edge, faint soiling to page blocks / sticker residue inside dj flap). Orange cloth with illustrated dj. 364 pp. 9 color plates, 92 bw illustrations within the text. "Robert Smithson (1938-1973) produced his best-known work during the 1960s and early 1970s, a period in which the boundaries of the art world and the objectives of art-making were questioned perhaps more consistently and thoroughly than any time before or since. In Robert Smithson: Learning from New Jersey and Elsewhere, Ann Reynolds elucidates the complexity of Smithson's work and thought by placing them in their historical context, a context greatly enhanced by the vast archival materials that Smithson's widow, Nancy Holt, donated to the Archives of American Art in 1987. The archive provides Reynolds with the remnants of Smithson's working life - magazines, postcards from other artists, notebooks, and perhaps most important, his library - from which she reconstructs the physical and conceptual world that Smithson inhabited. Reynolds explores the relation of Smithson's art-making, thinking about art-making, writing, and interaction with other artists to the articulated ideology and discreet assumptions that determined the parameters of artistic practice of the time." - rfrom dustjacket. (Inventory #: 35896)
$24.99 add to cart or Buy Direct from Mullen Books
Share this item