Moon in the West 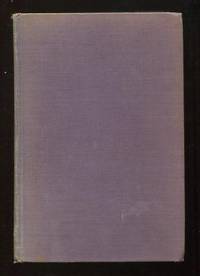 by Collins, Bertrand
New York: Liveright, Inc.. Good. (c.1933). First Edition. Hardcover. (no dust jacket) [shelfworn, bumping/fraying at most corners, small tear in cloth at top of spine, uneven fading to cloth, small bookseller's rubber stamp on front pastedown (Bertrand Smith's Acres of Books, Long Beach, California))]. Novel about an aspiring novelist, Stephen, who returns to New York after a couple of years in Mexico, has a manuscript rejected by publishers, and intends to head off to Paris to recharge his creative batteries and also to catch up with his old friend Tony, who has inherited a large fortune and is a talented musical comedy composer to boot, but who (per a contemporary review) "prefers to make his friends among a tawdry crowd of vulgarians." Stephen lingers in New York for a while, though, and soon develops a crush on Tony's wife, while also eventually discovering that Tony is cheating on said wife with Stephen's cousin. Taking notes? Me neither. Also per the reviewer: "Mr. Collins crowds his canvas with portraits of the aristocratic rich and mere plutocrats. With a few exceptions, the portraiture is very good, indeed. These people behave and talk in character, but they talk too much and their conversation is not sufficiently brilliant or profound to palliate dragging action." Caveat emptor, as the French would say. According to the review I dredged up, this was the author's first novel, but an OCLC search turns up at least two earlier works -- but none later, suggesting that this one may have been his third strike. (I might also observe that as of this writing only one other copy of this book is being offered online, for $199 by some idiot Amazon seller.) . (Inventory #: 22455)
$25.00 add to cart Available from ReadInk
Share this item
ReadInk
Offered by

The Delicatessen Husband, and other essays

New York : Harcourt, Brace and Company , (c.1926)
(click for more details about The Delicatessen Husband, and other essays)

Custer's Fall: The Indian Side of the Story [*SIGNED*]

New York : Duell, Sloan and Pearce , 1957
(click for more details about Custer's Fall: The Indian Side of the Story [*SIGNED*])
View all from this seller>