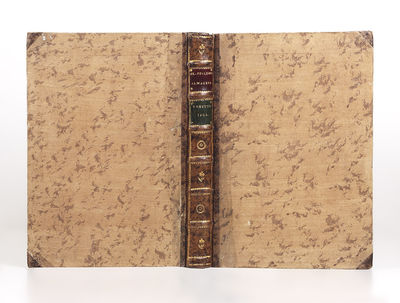 by PTOLEMAEUS, Claudius
Printer's device in red on title & numerous woodcut diagrams in the text. Title printed in red & black. 6 p.l., 143 numbered leaves. Folio, most attractive early 18th-cent. mottled half-sheep & mottled boards (head of spine a bit worn, title a little browned), spine gilt, red & green morocco lettering pieces on spine. Venice: L. Giunta, 1528. First edition of the first translation of the Almagest from the original Greek. Previously Ptolemy's great astronomical text was available only in the 12th-century translation of Gherardo da Cremona from an Arabic translation (1st ed.: 1515). The present translation was made directly from the Greek in 1451 by George of Trebizond, using a manuscript in the Vatican; this translation was edited for publication by Luca Gaurico. The original Greek text was not published until 1538. The Almagest was the foundation of ancient astronomy and a work as influential as the Elements of Euclid. "Ptolemy's chief work in astronomy, and the book on which his later reputation mainly rests, is the Almagest...It is a manual covering the whole of mathematical astronomy as the ancients conceived it...the Almagest is a masterpiece of clarity and method, superior to any ancient scientific textbook and with few peers from any period."-D.S.B., XI, pp. 187 & 196. "Among the instruments mentioned or described in the Almagest are the equatorial armillary for determining the equinoxes at Alexandria; the plinth and the meridional armillary for determining the midday and meridian altitude of the sun; the triquetrum for measuring meridian transits of the moon or fixed stars; and the armillary astrolabon."-Stillwell 97. A very fine and crisp copy with the early 18th-century bookplate of "Co. Riccati." This was the noble Riccati family which held land near Venice. The family produced two prominent scientists: Jacopo Francesco (1676-1754) and his second son Vincenzo (1707-75). They both made important contributions to mathematics (see D.S.B., XI, pp. 399-402). ❧ Sparrow, Milestones of Science, 167. (Inventory #: 5482)
$50,000.00 add to cart or Buy Direct from
Jonathan A. Hill, Bookseller
Share this item
Jonathan A. Hill, Bookseller, Inc.
Offered by