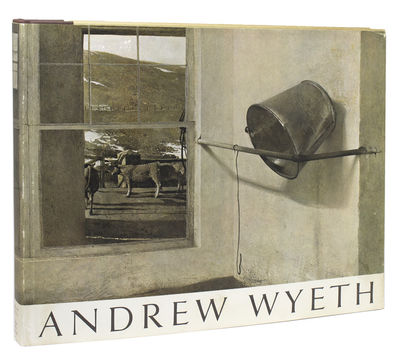 by (Wyeth, Andrew) Meryman, Richard
Boston: Houghton Mifflin, 1968. First edition. With numerous full-color plates (some double-spread) of Wyeth's paintings. 1 vols. Oblong folio. Original tan cloth with brown cloth spine, dust jacket. Light soiling to boards, but about fine in near fine jacket with minor rubbing at extremities. Wyeth, Andrew. First edition. With numerous full-color plates (some double-spread) of Wyeth's paintings. 1 vols. Oblong folio. Inscribed Copy to Lincoln Kirstein. INSCRIBED by the artist to Lincoln Kirstein on the half-title: "To Lincoln & Fido / Betsy & Andy." Kirstein, who was on the board of MoMA, met Andrew Wyeth after the museum acquired CHRISTINA'S WORLD in 1948. Wyeth was still largely unknown at that time, and he quickly came to rely on Kirstein for support and honest criticism of his work. "Kirstein appointed himself Wyeth's friend, admirer, mentor, and stern critic - in essence a supersuccessor to NC. [...] Wyeth thinks that in the 1950s he needed Kirstein to push him toward more form in his work, more solidity" (Meryman, Andrew Wyeth: A Secret Life (1998) p 239, 243). Kirstein, who disdained most abstract art, was essential in providing Wyeth the confidence he needed to continue work in the face of hostile critics who derided his art as sentimental and unsophisticated. Wyeth was fond of quoting Kirstein's dismissive opinion of the critics, "Why do you want approval from those horses' asses?" (ibid, p. 390). Kirstein was a father-figure to two generations of Wyeth artists, and as Andrew's son Jamie developed his own artistic gifts, Kirstein began to transfer his attention to the younger Wyeth. "After posing for nineteen-year-old Jamie, Kirstein more or less shifted his allegiance from Andrew and became Jamie's friend and mentor. Kirstein told Betsy, 'You gave me the only son I ever had'" (ibid, p. 275) A difficult book to find inscribed, let alone with an association as intimate as this. (Inventory #: 244136)
$1,250.00 add to cart or Buy Direct from
James Cummins Bookseller
Share this item
James Cummins Bookseller Inc.
Offered by