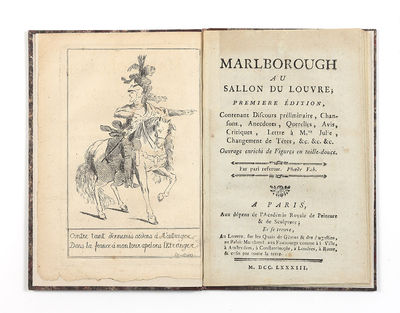 by [BEFFROY DE REIGNY, Louis Abel]
Engraved frontis. port. & one engraved plate. 32 pp. 8vo, attractive antique calf-backed marbled boards, spine gilt, red morocco lettering-piece on spine. Paris: "Aux dépens de l'Académie Royale de Peinture & de Sculpture," 1783. First edition of this little-known work by Beffroy (1757-1811). A man of letters, he authored several dramas and comedic works, often under the pseudonym "Cousin Jacques." He quickly fell out of favor during the Revolutionary period once it was discovered that he intended to publish a harsh critique of what he considered a deeply flawed demagogic movement. Subsequently, he and his works were largely forgotten. In the late 18th century, French humorists targeted John Churchill, first duke of Marlborough, after his sudden fall from the graces of Queen Anne. The present work comically describes an imagined visit by Marlborough to the Salon in the form of a play with musical accompaniment (lyrics on pages 9-10). The author depicts the duke as a dimwit with little taste and of exceptional stupidity as he walks around observing the art on display. Very good copy. Leaf A4 misbound after title. Two small tears to title, one just touching a letter. ❧ Auricchio, "Adélaïde Labille-Guiard: Artist in the Age of Revolution," p. 35. N.B.G., Vol. 5, col. 152. (Inventory #: 5500)
$1,650.00 add to cart or Buy Direct from
Jonathan A. Hill, Bookseller
Share this item
Jonathan A. Hill, Bookseller, Inc.
Offered by