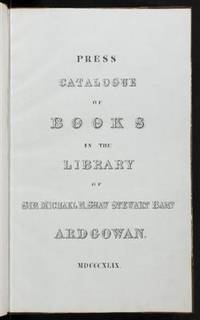 by (SHAW-STEWART, Sir Michael Robert, 7th Baronet)
Lithographed title & 80 printed ruled leaves, each written on one side in a neat & legible hand. Folio (380 x 240 mm.), orig. half calf (covers somewhat worn & rubbed, upper hinge cracked but strong), leather lettering label on upper cover, a.e.g. "Ardgowan: 1849." The Shaw-Stewart family has been one of the most important in Renfrewshire since the 15th century. The lands of Ardgowan, set on the south shores of the Firth of Clyde, were given to John Stewart by his father King Robert III of Scotland in 1403 and the estate has been passed down from father to son or uncle to nephew to the present day. Sir Michael R. Shaw-Stewart (1826-1903), was M.P. for and Lord Lieutenant of Renfrewshire and chairman of the County Council. He inherited an estate of about 26,400 acres. Ardgowan House - "the house of the smith" - was built between 1798 and 1801 for Sir John Shaw Stewart, the 4th Baronet. The house was designed by William Cairncross who was Robert Adam's assistant when he designed and built Culzean Castle. Culzean had just been completed and greatly influenced the original design of Ardgowan House. Along with a magnificent house, Shaw-Stewart also inherited a fine library, here detailed. It is arranged by shelf-mark with title and author, format, place of publication, and date. Approximately 2000 titles are listed and, quite interestingly, about 80 percent were printed before 1800 (including a good number of 16th-century books). There are many continental imprints. Fine condition. (Inventory #: 1814)
$3,000.00 add to cart or Buy Direct from
Jonathan A. Hill, Bookseller
Share this item
Jonathan A. Hill, Bookseller, Inc.
Offered by


(click for more details about The Artists' Books in European View: the Soul of Books or the Third Generation)