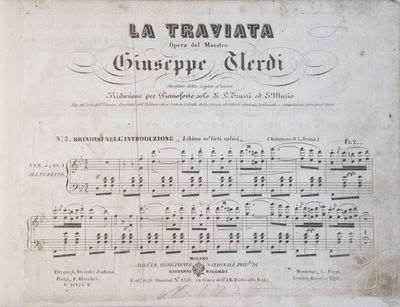 An assemblage of individual numbers from the opera in piano score, each with its own separate title as part of the first page of music, as follows:

Some leaves quite worn, soiled, and thumbed; minor stains; several small tears; occasional markings; edges of some leaves repaired. The present piano solo numbers appear to have been issued shortly after the separate issues of the 18 individual numbers in piano-vocal score. See Hopkinson 55A.

An opera in three acts by Giuseppe Verdi to a libretto by Francesco Maria Piave after Alexandre Dumas's play La Dame aux Camélias, La Traviata was first performed in Venice at the Teatro La Fenice on March 6, 1853.

"... La traviata was written in great haste and its genesis was thoroughly entangled with the creation of Verdi's previous opera, Il trovatore. Perhaps not surprisingly, there are a series of startling musical resemblances between the two operas. But these similarities are on what one might call the musical surface; in dramatic structure and general atmosphere the two works are remarkably different, in some senses even antithetical. La traviata is above all a chamber opera: in spite of the 'public' scenes of the first and second acts, it succeeds best in an intimate setting, where there can be maximum concentration on those key moments in which the heroine's attitude to her surroundings are forced to change. Perhaps for this reason, the cabalettas, those 'public' moments which are so inevitable and essential to the mood of Il trovatore, tend to sit uneasily; we remember La traviata above all for its moments of lyrical introspection."

"It is nevertheless easy to see why La traviata is among the best loved of Verdi's operas, perhaps even the best loved. In many senses it is the composer's most 'realistic' drama. The cultural ambience of the subject matter and the musical expression are very closely related: no suspension of disbelief is required to feel that the waltz tunes that saturate the score are naturally born out of the Parisian setting. And, perhaps most important, this sense of 'authenticity' extends to the heroine, a character whose psychological progress through the opera is mirrored by her changing vocal character: from the exuberant ornamentation of Act 1, to the passionate declamation of Act 2, to the final, well-nigh ethereal qualities she shows in Act 3. Violetta - Stiffelio, Rigoletto and Gilda notwithstanding - is Verdi's most complete musical personality to date." Roger Parker in Grove Music Online. (Inventory #: 28037)
$600.00 add to cart or Buy Direct from
J. & J. Lubrano Music Antiquarians
Share this item