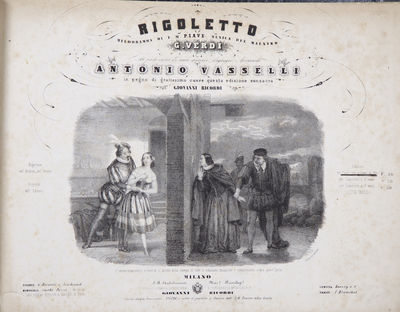 by VERDI, Giuseppe 1813-1901
Milano: Giovanni Ricordi [PNs 23071-23090], 1852. Oblong folio. Newly bound in quarter black cloth with matching black paper boards, titling to spine gilt. 1f. (recto title incorporating a fine lithographic illustration of a scene from the opening of Act III of the opera by Corbeita after a drawing by Focosi, verso blank), 1f. (recto index of 20 numbers, verso named cast list with statement regarding the first performance), 5-231, [i] (blank) pp. Engraved. Each number with separate as well as continuous pagination.

Named cast includes Mirate as the Duke, Varesi as Rigoletto, Brambilla as Gilda, and Ponz as Sparafucile. Ricordi blindstamp to lower left corner without date.

Rigoletto, in three acts to a libretto by Francesco Maria Piave after Victor Hugo's play Le roi s'amuse, was first performed in Venice at the Teatro La Fenice on March 11, 1851.

"The première, with a cast that included Raffaele Mirate (Duke), Felice Varesi (Rigoletto...) and Teresa Brambilla (Gilda), was an enormous success, and the opera, in spite of continuing problems with local censors, almost immediately became part of the basic repertory, being performed more than 250 times in its first ten years. Rigoletto has never lost this position and remains one of the most frequently performed operas in the international repertory... Rigoletto is almost always placed as the true beginning of Verdi's maturity, the essential dividing line between 'early' works and the succession of repertory pieces that will follow..." Roger Parker in Grove Music Online. (Inventory #: 28089)
$2,000.00 add to cart or Buy Direct from
J. & J. Lubrano Music Antiquarians
Share this item

The American Minstrel: A choice collection of the most popular Songs, Glees, Duets, Choruses, &c. Many of which are Original. With Select Music

Cincinnati : Stereotyped and Published by J.A James and Co , 1837
(click for more details about The American Minstrel: A choice collection of the most popular Songs, Glees, Duets, Choruses, &c. Many of which are Original. With Select Music)

The Chaplet. A Musical Entertainment, As it is performed at the Theatres Royal in Dury Lane and Covent Garden ... For the Voice, Harpsichord, and Violin. [Keyboard-vocal score]

London : Harrison & Co , 1784
(click for more details about The Chaplet. A Musical Entertainment, As it is performed at the Theatres Royal in Dury Lane and Covent Garden ... For the Voice, Harpsichord, and Violin. [Keyboard-vocal score])
View all from this seller>