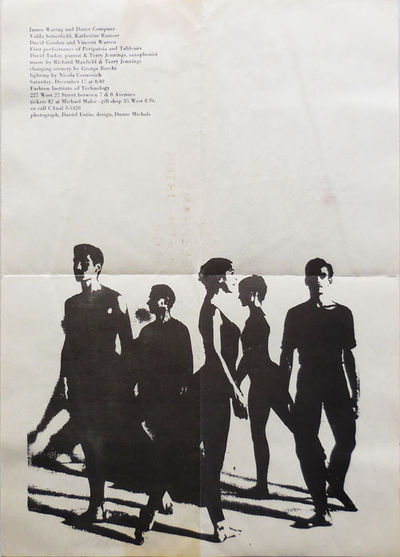 by Experimental Dance - James Waring and Dance Company, Valda Setterfield, Katherine Ramsey, David Gordon and Vincent Warren (with David Tudor & Terry Jennings)
New York: Elephant / Fashion Institute of Technology, 1960. First edition. Loose Sheets. Very Good. Single folded sheet of paper announcing the first performance of Peripateia and Tableaux by James Waring and Dance Company with Valda Setterfield, Katherine Ramsey, David Gordon and Vincent Warren. Music provided by David Tudor and Terry Jennings. Music composed by Richard Maxfield and Terry Jennings. Lighting by Nicola Cernovich. The event was held Saturday December 17 [1960] at Fashion Institute of Technology. Sheet measures 9 3/4" wide x 13 3/4" tall. It features a photograph by Daniel Entin and design by a young Duane Michals. This poster was mailed to fluxus poet Jackson MacLow with his handwritten address on the verso. The verso of this poster also has a somewhat sophisticated drawing in multi-color inks (by Mac Low?). Otherwise this rare poster is in very good condition and is suitable for framing. A significant piece of avant garde dance ephemera from the early days of Waring's creative output in NYC. (Inventory #: 23187)
$750.00 add to cart or Buy Direct from Derringer Books
Share this item
Derringer Books
Offered by

Florence : Erschienen bei argobooks , 2014
(click for more details about Time Is What Prevents Everything from Happening at Once - 10 Postcards (VR 14))

i will never be beautiful enough to make us beautiful together

Brooklyn : Sorry House , 2013
(click for more details about i will never be beautiful enough to make us beautiful together)
View all from this seller>