Asia with the Islands adjoyning described, the atire of the people, & Towns of importance...; John Speed Map of Asia (First British map of Asia ever published) 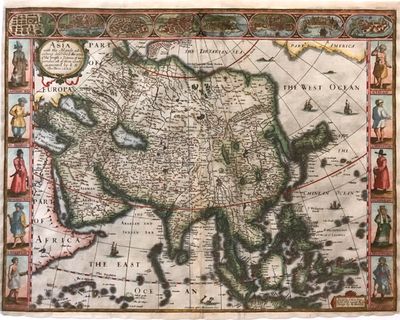 by SPEED, John
London: George Humble, 1627. unbound. Map. Engraving with later hand coloring. Image measures 15.25" x 20". This fascinating 1627 map of Asia by John Speed is the first British map of Asia. The map presents the entire continent from the Mediterranean east to include Japan and the East Indies. The map presents many speculations and common conventions found at a time when parts of Asia were largely unexplored by Europeans.Korea is presented as an elongated peninsula while the Kamchatka Peninsula is entirely absent. The map shows Japan and a fairly detailed depiction of the East Indies. Further west, the Caspian Sea is presented along its East-West axis, as per the practice at the time. The Great Wall of China is depicted in a grand style. Throughout, several kingdoms, important cities, rivers, lakes, islands, mountains, and other topographical features are noted.One of the most interesting cartographic feature on this map is the appearance of Lake Ciamay (or Lake Chiamay) near northeast India. This mythical lake appeared on maps from the 16th to late 18th century and was believed to be the source of the great rivers of Southeast Asia.Illustrations of ships and sea monsters are included. The map is surrounded on the left and right with illustrations of the costumes and people from various parts of the continent. Along the top border, eight city views are included detailing Candy, Goa, Damascus, Jerusalem, Ormus, Bantam, Aden, and Macao.Engraved by Abraham Goos (1590 - 1643), a master engraver was the son of Pieter Goos and Margareta van den Keere which were both from map families. Appears in Speed's important "Prospect of the Most Famous Parts of the World". The map is in good condition with some wear and verso repair along the original centerfold. Overall foxing and narrow margins. English text verso.John Speed (1552-1629) is widely considered to be the most famous English cartographer of the 17th century. His atlas "The Theatre of the Empire of Great Britaine" contained the first set of individual county maps of England and Wales, as well as significant town plans that are in many cases the first visual records of their subjects. This important map of Asia is a wonderful example of his work. (Inventory #: 273306)
$3,650.00 add to cart or Buy Direct from
Argosy Book Store
Share this item