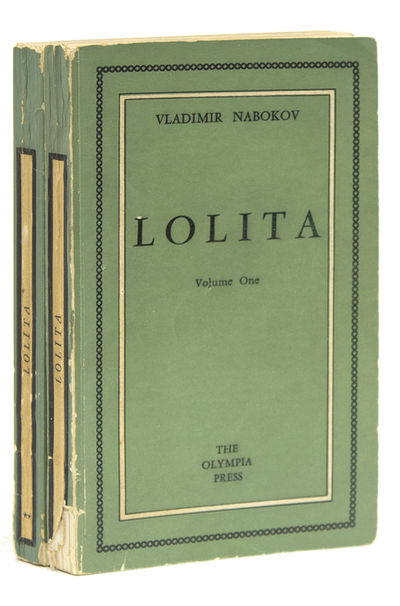 by Nabokov, Vladimir
Paris: Olympia Press, 1955. First edition. 188, [2]; [3]-223, [1] pp. 2 vols. 12mo. Green printed wrappers, priced Francs : 900 on back wrappers. Spines toned, lower portion of spine of first volume worn with small loss. Dated 1.X.1955 on the flyleaf of volume I in an unknown hand. Very good. Morocco backed slipcase, cloth chemises. First edition. 188, [2]; [3]-223, [1] pp. 2 vols. 12mo. The Nabokov Cousins: 'Lolita' Signed. This copy with ownership signatures of composer and cosmopolitan Nicolas Nabokov (1903-1978) on the flyleaf of each volume. With the signature of his first cousin the author on the flyleaf of the first volume: "Vladimir". The cousins got to know each other when the aristocratic Nabokov family arrived in Yalta in the aftermath of the Bolshevik coup, and their paths crossed repeatedly during their new lives in exile. Vladimir invented himself as one of the great literary figures of the twentieth century; Nicolas pursued his musical studies and achieved renown as a composer. Nicolas accepted a position at Wells College in Auburn, N.Y., in 1936; when war broke out in Europe, he was in a position to assist the German composer Hindemith and the Austrian artist and designer Victor Hammer in fleeing the Nazis. He also helped his cousin Vladimir, who sailed from France for America in May 1940. For The Return of Pushkin, first performed in 1948, Vladimir prepared the English text. Lolita gained worldwide notoriety for its author upon publication in 1955. Nicolas later wrote his cousin, "I never told you how much I liked both Pnin and Lolita and how happy I am about the success of the latter. The only thing that troubles me is that due to my vagrant, erotic past, people often think that Humbert Humbert is a portrait of me! I suppose that the way to profit by it is to say it openly and go on a lecture tour through American high schools and girls' colleges under the title 'How I did It' ..." (quoted in Giroud p. 313). The cousins met regularly through the 1970s. Juliar A28.1, issue a. Provenance: from the estate of Nicolas Nabokov (Inventory #: 306972)
$55,000.00 add to cart or Buy Direct from
James Cummins Bookseller
Share this item
James Cummins Bookseller Inc.
Offered by