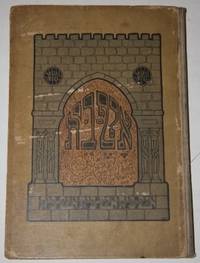 by Kipniss, Levin. Illustrated by Zeev Raban
Berlin: Verlag "Lasefer" S. D. Saltzmann. Printed by Richard Labisch & Co. , 1923. First edition. Hardcover. Good. 8vo. 25 cm. 30 unnumbered pages, 27 of which have a chromolithographic, "illuminated" illustration of the Hebrew letter, and an object or thing which begins with that letter, as typical of ABC books, other than this one is using the Hebrew alphabet. The coloring, especially the profuse use of gold set against a gray slate backdrop, is riveting, and together with the general feel and style of the illustrations, relates easily to the Jugendstil book illustrations so prevalent in Germanic children's books of the period. Raban was a teacher of the Bezalel School of Art. The book is uncommon in its original edition, which this is. Moderate to arguably heavy wear and soiling. (Inventory #: 005508)
$750.00 add to cart Available from
White Fox Rare Books & Antiques
Share this item
White Fox Rare Books and Antiques
Offered by