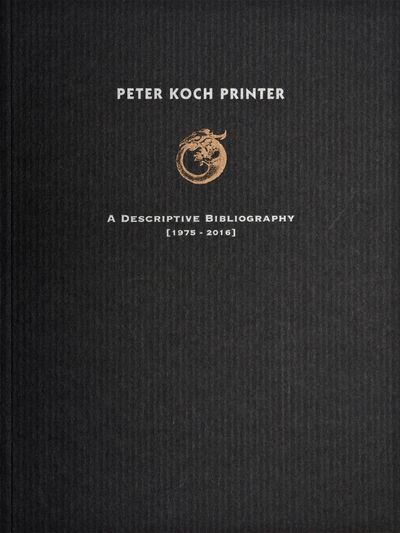 by Koch, Peter Rutledge, Nina M. Schneider, et al.
Berkeley, California: Editions Koch and Stanford University Libraries, 2017. smythe sewn, soft cover (letter press printed) and slipcased. 9 x 12 inches. smythe sewn, soft cover (letter press printed) and slipcased. 3 volumes, 492 pages. "Overall, this is the best work in our own field towards an ecological bibliography, a restatement of the book as art, and the boundless ambition of a printer who aspires to elevate his craft into a universally perceived and embraced art form for all advocates of the printed page." - John Neal Hoover, PBSA A descriptive bibliography in three volumes, published in conjunction with the exhibition "Peter Koch Printer: A Forty-year Retrospective" at the Green Library, Stanford University, May - October, 2017, later shown at the Grolier Club, New York, September - November, 2019. With 625 full-color illustrations. Volume 1: Peter Koch Printer: Embodied Language and the Form of the Book. A Descriptive Bibliography [1974-2016] This volume includes: critical essays by Mark Dimunation, Chief of the Rare Book and Special Collections Division, Library of Congress, and Timothy D. Murray, Head, Special Collections, University of Delaware Library; an interview with Koch by Roberto G. Trujillo, Assistant University Librarian and Director of Special Collections, Stanford University; and a descriptive bibliography by Nina M. Schneider, Rare Books Librarian, William Andrews Clark Memorial Library. Volume 2: Hard Words: Memory and Death in the Wild West. This volume documents Koch's "Western Suite," which consists of three portfolio editions, two books, and two installation/exhibitions dedicated to themes of exploration and the subsequent destruction of the American West. The two volumes, Liber Ignis and The Lost Journals of Sacajewea, are fully illustrated in facsimile. Two exhibition/portfolios, Hard Words and Nature Morte, are presented in their entirety. The editions and commentaries are accompanied by a lengthy critical essay, "The Minotaur and the River," by novelist and scholar Aaron Parrett. Volume 3: Against Design: an Interview with Peter Rutledge Koch Introduction by Russell Maret. In this volume, which focuses on the typographic design and letterpress printing that issued from the Koch studios over more than four decades, graphic designers and educators Monique Comacchio and Camden Richards interview Koch about his printing practice and thoughts on typography and design. The result is an exploration of ideas related to material literacy and the art of printing as a philosophical practice. Against Design is generously illustrated with examples of Koch's bibliophilic, typographic, and cowboy surrealist ephemera. "Letterpress was once a useful craft, like carpentry or thatching. This did not prevent determined and talented people from raising it to an art and enriching the lives of humans for centuries after. In the present world, the vital craft of letterpress has surrendered nearly all its practical functions - but art still runs uphill, as it always has. So letterpress printers continue to sort themselves, inescapably, into the artists and the others. It's in the nature of the craft. "Peter Koch is an artist among printers. He knows the tradition, all the way back. He also knows it as far forward as anyone can. As a master practitioner of an ancient art, he has joined forces repeatedly with those who are chipping away at the technological frontier, and with others who persevere in the most demanding manual crafts. He engages, as great printers always have, in collaborations with master papermakers, printmakers, wood engravers, punchcutters, binders, and others who make the book what it is: a rich and varied but private and portable theater that nourishes and unifies the body and the mind." - Robert Bringhurst. (Inventory #: 130012)
$225.00 add to cart or Buy Direct from Oak Knoll Books
Share this item