Expositio in epistolas Pauli, illuminated manuscript on parchment, in Latin with frontispiece miniature possibly by a son of Jean Budé 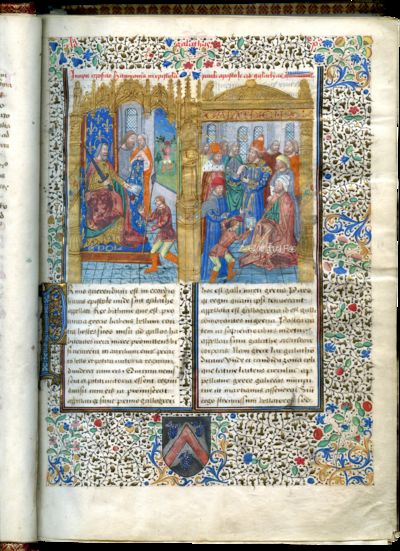 by HAIMO OF AUXERRE
A BEAUTIFUL ILLUMINATED COPY OF THE COMMENTARY ON THE EPISTLES OF PAUL BY HAIMO OF AUXERRE COMMISSIONED BY Jean II Budé. Illuminated manuscript on parchment, in Latin, France, Paris, c. 1460-1480 and c. 1500. Dimensions 278 x 105 mm. 193 folios, catchwords, guide words, numerous small initial in red and blue, TEN LARGE DECORATED INITIALSin blue or red and gold accented with foliage and flowers, LARGE FRONTISPIECE MINIATURE with acanthus leaf border and bas-de-page the arms of Jean Budé. BINDING: Late eighteenth-century red morocco attributed to Bozerian, with fitted red slipcase. TEXT: This manuscript contains the commentary on the Epistles of Paul by Haimo of Auxerre apart from Romans and 1-2 Corinthians which never intended to be included. Haimo of Auxerre taught at the school of the Benedictine house of Saint-Germain at Auxerre in the ninth-century and is the author of many widely-read commentaries on the Song of Songs, Revelations, and the Minor Prophets, as well as of many sermons. He was best known for his pedagogical skills and anticipated scholasticism by three centuries. ILLUSTRATION: The manuscript opens with a two panel, three-quarter page miniature depicting Saint Paul, on the left, sending his letter via messenger to the Galatians, on the right. The frontispiece was added about 20 to 30 years after the text was completed. Stylistic analysis suggests it was painted in Troyes where it could have been completed by one of the sons of Jean Budé, who were canons at the Cathedral St.-Pierre in Troyes, perhaps at the behest of Jean Budé's son Guillaume. The page bears comparisons with a group of manuscripts painted by an artist active in Troyes at the end of the fifteenth century and during the first quarter of the sixteenth century. The portrayal of Saint Paul as a king with a sealed document may have had personal significance for a Jean Budé and his son Guillaume who began their careers in the French Court as royal secretaries. PROVENANCE: Copied in Troyes, this manuscript belonged to Jean II Budé (1430-1502), royal courtier, bibliophile, and father to the foremost French humanist Guillaume Budé (1468-1540). It displays his owner's inscription and date of acquisition. Then in the collections of Nicolas Thoynard of Orléans (1629-1706), Joseph Barrois (c. 1785-1855), and Bertram Ashburnham, 4th Earl of Ashburnham (1797-1878). Sold at Sotheby's, 9 December 1909, lot 404. Later bought by William Foyle, Beeleigh Abbey (1885-1963) from Kundig, Geneva; it appeared in his sale in London, Christie's, 11 July 2000, lot 24, sold to H.P. Kraus. Subsequently in his sale at Sotheby's (The Inventory of H. P. Kraus), New York, 4-5 December 2003, lot 306. (Inventory #: TM 908)
$125,000.00 add to cart Available from
Les Enluminures, Ltd.
Share this item
Les Enluminures, Ltd.
Offered by