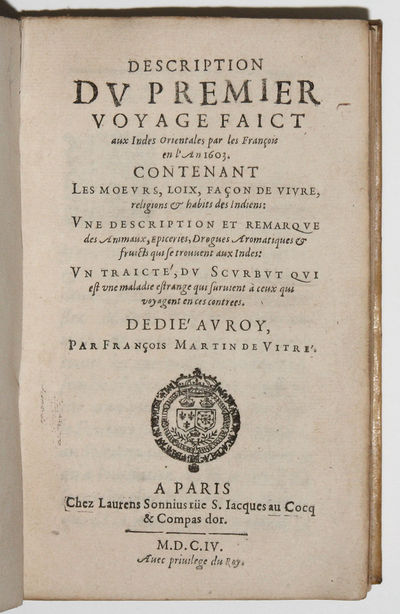 by François Martin, de VITRÉ
Paris: Laurens Sonnius, 1604. Hardcover. Near Fine. 8vo. [16.8 x 10.5 cm]. (4) ff., 134 (i.e. 131) pp. Bound in contemporary vellum, housed in modern book box. Signature I misbound. Impeccable copy, excellent. Extremely rare first edition of the first French account of the East Indies to appear in print (cf. Lach & van Kley, III: 373), here in an impeccable copy bound in early vellum. The work is that of the French adventurer François Martin de Vitré (c. 1575-c. 1631), who, upon his return to Brittany from the East Indies in 1603, prepared this lively account at the behest of King Henry IV (1553-1610). Martin's narrative inspired Henry in 1604 to establish the first iteration of the French East India Company (Compagnie des Indes Orientales) with designs on exploiting the treasures described in the present work (cf. Lombard, "Martin de Vitré, Premier Breton à Aceh"). Likely enlisted as ship's surgeon aboard the Croissant, François Martin of Vitré, along with several companions from Saint-Malo and Laval, sailed from Britanny in 1601, rounding the Cape of Good Hope in May of that year. The Croissant's companion ship, the Corbin, wrecked in the Maldives, but Martin eventually succeeded in reaching Ceylon and trading with the Aceh in Sumatra. Upon his return journey he was captured by the Dutch at Cape Finisterre but finally returned to France in 1603. In his preface Martin summarizes the European powers' incursions in the East and laments the tardiness of the French to exploit the region's riches: "This has made me deplore the defect of the French, who more than any other nation are provided with a vivacity of spirit and a formidable worthiness, but who have nevertheless languished for so long in a slumber of idleness, ignoring information on the treasures of the East Indies with which the Portuguese and Spanish have enriched themselves" (p. 3). In the first two sections of the work Martin gives ample space to the discussion of flora, fauna, and commercial matters relevant the regions he visits (aromatic plants, spices, crops, the elephant, rhinoceros and tiger, the crocodile, tortoise and bird of paradise, livestock, the hunt, woods, weights and measures, currency, etc.), but he also includes a great deal of anthropological detail. Evidently the stereotypical red-blooded Breton seafarer, Martin, in his chapter on the "habits and customs we observed during our stay in the Indies" (pp. 38-66) dwells mainly on women - the prostitution of premarital women, their perfumes, their bathing rituals, their medicines, and their punishment for adultery. He also notes gestures of salutation (two hands together before one's forehead), marriage customs ("they can marry seven wives if they have the means to support them"), and gives detailed reports on the traditions and inner workings of both Hinduism and Islam. He notes Turkish merchants to be frequent visitors to these lands, and writes of seeing a cannon of Chinese manufacture. Martin's intriguing 4-page dictionary of words useful for the traveler includes a section on counting in Malagasy, the language of Madagascar. The volume also contains a brief but significant "dictionary" of the Malay language, described here as "Elegant and easy to learn, like Latin" ("fort beau & facile a aprendre . comme le latin en leurope"). Finally, in his presumed role as ship's surgeon, Martin penned a third section treating scurvy, recommending among other cures the use of citrus fruits and an aqueous preparation of alum. OCLC lists only two U.S. copies of this 1604 first edition: NYPL and the Minnesota's Bell Library (lacking 2 prelims). The work was reprinted in 1609, and of this second edition OCLC locates U.S. copies only at Harvard and the Boston Athenaeum. * Atkinson 444; Brunet, Supl. I, 920 (citing only the second edition); cf. also Denys Lombard, "Martin de Vitré. Premier Breton à Aceh (1601-1603)," Archipel 54: 3-12 (1997). (Inventory #: 5561)
$50,000.00 add to cart Available from Martayan Lan
Share this item
Martayan Lan, Inc.
Offered by