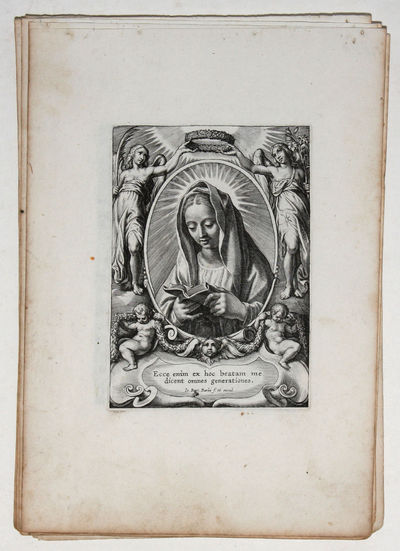 by BARBÉ, Jean-Baptiste / VAN LOON, Theodoor
[Antwerp?]: Jean-Baptiste Barbé, 1620. No Binding. Very Good. [23.3 x 16 cm]. Single-sided engravings, (1) engraved title, (20) engravings. Unbound, fixed with small staples at top edge. Minor marginal handsoiling and spotting, small marginal holes to a few leaves, minor edge wear, light browning to a few leaves. Generally very good. Very rare first edition of a set of engravings by the Antwerp printmaker Jean-Baptiste Barbé (1578-1649) after the designs of Theodoor van Loon (c.1581-1649), a Flemish painter noted as an early stylistic follower of Caravaggio (1571-1610). The work presents bust-length portraits of the Holy Family, the Four Evangelists, and the Twelve Apostles, each set within a fancifully designed sculptural frame, with the wording of the collection's title - Icons with their Frames ('parergis')- emphasizing the importance of the relationship between painted image and its enclosing frame. While the strong shading of some plates recalls Caravaggio's tenebrism, facial types, which gaze sweetly into the distance, are perhaps more indebted to those of Guido Reni (1575-1642), who was working in Rome and at the height of his popularity around the time these engravings were produced. Each 'icon' is depicted with his attribute or an instrument of martyrdom (e.g., Peter's keys, Luke's ox, Andrew's cross), and the frames often echo these iconographic connections (e.g., herms flanking the portrait of James the Major are dressed as pilgrims). The emphasis on framing devices here is likely related to the rise in an interest in Christian archeology that began around 1600 and greatly influenced the way venerable images were treated in the remodeling of major churches and their altarpieces: For example, Theodoor van Loon certainly would have known his countryman and exact contemporary Peter Paul Rubens' (1577-1640) early Roman commission to enclose the ancient Santa Maria in Vallicella icon at Chiesa Nuova in an elaborate, pictorial altar frame (1606-08). This suite of engravings by Barbé should not, therefore, be seen only as a collection of images suitable for personal devotion, but also as a thoughtful visual treatise concerning the way artists were asked to confront and re-present early Christian art and iconography in the first half of the seventeenth century. Interestingly, these engravings are prominently dedicated on their title page to Wenceslas Cobergher (1560-1634), a painter, architect, engineer, theorist of institutional pawn shops (monti di pietà), numismatist, and collaborator of van Loon who was deeply interested in Roman and early Christian antiquities and their use by contemporary artists. * Hollstein, Dutch and Flemish, vol. 1, p. 100, nos. 45-64; M. Funck, Livres belge à gravures, p. 356; I. Baldriga, et al., Theodoor van Loon: "Pictor ingenius" et contemporain de Rubens, 2011; T. Meganack, De kerkelijke architectuur van Vensel Cobergher in het light van zijn verblijf te Rome, 1998. OCLC and KVK locate copies at the National Gallery (D.C.), Clark Art Institute, BnF, and Vlaamse Erfgedbibliotheek (Antwerp). (Inventory #: 5440)
$3,850.00 add to cart Available from Martayan Lan
Share this item
Martayan Lan, Inc.
Offered by