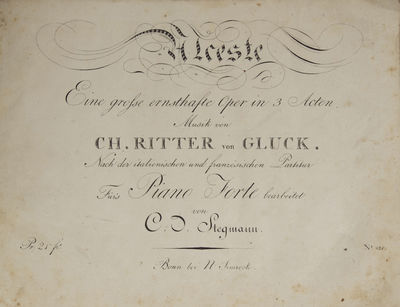 The French version of Alceste, to a libretto by Marie François Louis Gand Leblanc Roullet, was first performed at the Académie Royale de Musique in Paris on April 23, 1776.

"Gluck's revision of Alceste for performance in Paris in 1776 amounts almost to a recomposition. His alterations were far more extensive than those he had made in his Paris adaptation of Orfeo ... The French Alceste had a new text by Roullet, Gluck's librettist for Iphigénie en Aulide, based on Calzabigi's libretto; but alterations to the plot and the order of events led to major differences between the two. The principals at the première of the French version included Rosalie Levasseur (Alcestis), Joseph Legros (Admetus), Henri Larrivée (Hercules), Moreau (Apollo) and Nicolas Gélin (High Priest). At the first Paris performances of Alceste the Act 3 denouement was substantially different from the version familiar today, and closer to the Italian original. Gluck and Roullet, after much criticism, altered the act to incorporate a part for Hercules, who has no place in the Italian original. Just as Gluck was arranging more music to enlarge the final divertissement, again to please Parisian taste, he heard of the death of his adopted daughter Marianne in Vienna; he left Paris and assigned the completion of the divertissement to Gossec. This revised version, published in Paris in 1776, is the one that has nearly always been performed subsequently." Jeremy Hayes in Grove Music Online. (Inventory #: 25656)
$138.00 add to cart or Buy Direct from
J. & J. Lubrano Music Antiquarians
Share this item