12-Page Account of a Trip to Florida, 1886 written by a Female School Teacher 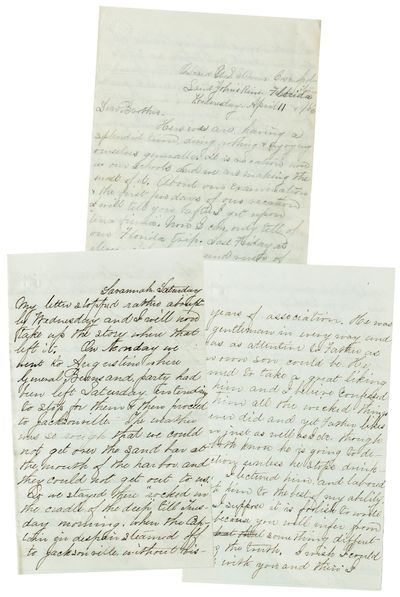 by (PETTIBONE, Louise)
Onboard U.S. Steamer Cosmopol, Saint John's River, Florida / Savannah, 1886. Unbound. Fine. Three leaves folded to make 12pp. Fine. A pencil-written four-page shipboard letter from Saint John's River dated on Wednesday, 11 April 1886, continued three days later in an eight-page letter written in ink from Savannah. Signed "Sister" and addressed to "Brother," both the writer and recipient were from the Pettibone family of Winchester, Connecticut. Old folds, some rubbing on one penciled leaf, but overall very readable and otherwise fine. "Sister" gives an account of going to Florida on her vacation from school. The first four pages tell of a group of fellow passengers, teachers and missionaries "...in our party are five ladies from Savannah, five from Hilton Head & six or seven from Charleston, &c." traveling with Louise and her father Rev. Ira Pettibone. They suffer sea sickness en route, and then arrive off Fernandina, only to be greeted by a shot overhead from the local Fort, bringing them up short, as that community was under quarantine. After they are checked for smallpox, cholera, and yellow fever, they are entertained on land by the local missionaries, and her father preaches on the Sabbath the next day. They then head off to St. Augustine, where they are thwarted by not being able to cross the sandbar, depriving them of their most cherished destination, and in frustration, head to Jacksonville, where they are greeted by General Burns and are entertained by other teachers, picnicking in the woods and gathering blackberries. After this they embark and awaken back in Hilton Head, where the party breaks up, with Louise heading back to her little school in Savannah, giving a brief but glowing review of that town. An unmarried woman of about 42 at the time, Louise here reveals to her brother "And what is more I got a real friend. It is a man too but you need not be alarmed for he is married... He was a gentleman in every way... ." She notes that her friend took a liking to her father and "and I believe confided to him all the wicked things he ever did and yet Father likes him just as well as I do, though we both know he is going to destruction unless he stops drinking." She identifies her friend as "Dr. Barton of R.I., was four years in the army as medical director of the department of South Carolina, writes for Blackwood and has written for the Knickerbocker and other periodicals. He is a graduate of Harvard College... ." Despite her protestations to the contrary, she swears her brother to confidence, and can't help revealing that she is flattered by the attention. The letter was written by Louise Pettibone (b. 1843), a teacher from Winchester, Connecticut. Both she and her father, the abolitionist Rev. Ira Pettibone, served for a period as missionaries and teachers to freedmen in Reconstruction-era Savannah (her father soon after the Civil War, starting in 1865). Curiously, Louise was married to Alonzo Smith just a year after this letter, about whom we could find little. The recipient of the letter was likely Louise's older brother Benjamin Pettibone. A relatively brief but colorful and pleasing account of a short trip to Northern Florida. (Inventory #: 416440)
$950.00 add to cart or Buy Direct from
Between the Covers Rare Books
Share this item

Lonson : Secker & Warburg , 1986
(click for more details about Ice and Fire)
View all from this seller>