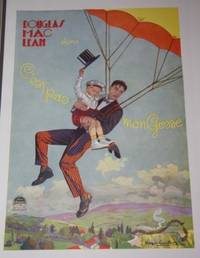 Paris: Societe Anonyme Francaise des Films Paramount. First Edition. Hardcover. Very Good. Scarce movie studio promotion, with only copy recorded on OCLC at the BNF. Folio, 38 by 28 cm. Unpaginated, but four pages devoted to each of 42 productions slated for the season. Each of the productions has one full page color plate -- essentially a movie poster mock-up -- and one or two tinted pages with photo images from the upcoming production. Most of the movies are from Hollywood, but there are a few French productions. At the time, Paramount was the largest and most powerful studio, and this lavish promotion, intended for exhibitors, was issued probably right before the release of "The Jazz Singer" and the movie industry was thrown into turmoil. Thus it came out at the precise moment bullish confidence was at its zenith, and in terms of silent movies, the industry had settled into some maturity, soon of course to be shaken. Many of the stars on the Paramount roster then remain well-known to this day, at least by movie afficianados, and a good number of them went on to substantial careers in the thirties and beyond in sound movies: Adolph Menjou, Bebe Daniels, Wallace Beery, Gloria Swanson, Warner Baxter, to name a few. Others are now more solidly associated with Silents, such as Harold Lloyd, Pola Negri and Clara Bow, although they all did make the transition to sound pictures. Visually, a highlight is a color plate of a movie theatre lobby, an image that captures the opulence, pretension and spirit of the commercial film industry in the late twenties. A fun, colorful, flamboyant and informative work for a serious movie buff. The cover has a bronzed surface, with blindstamping of the title, the Paramount insignia, etc. Restorations to the joints. Clean within. (Inventory #: 005565)
$1,250.00 add to cart Available from
White Fox Rare Books & Antiques
Share this item
White Fox Rare Books and Antiques
Offered by