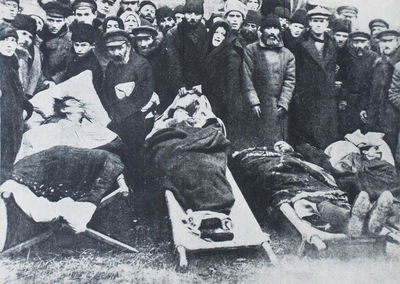 by Островский З.С. (Ostrovsky, Z. S.)
Москва (Moscow): Издательство Акц. общество "Школа и книга" ("T, 1927. Limited First edition. Softcover. g to vg. 1/5000. Folio (10 3/4 x 14 1/2"). 134, [2]pp. Original photo-illustrated wrappers, with silver lettering and decoration to covers. Decorative initials. Illustrated with no less than 219 photogravures, this work is based on an exhibition of documents and photographs organized by the Jewish Commitee of Victims of Pogroms, and held in Moscow in the summer of 1923.

It is a gruesome photographic account of the third wave of pogroms which occurred in Russia between 1918 and 1921, far surpassing in scope and gravity the two previous outbreaks of the 1880s, and of 1903-1906. These attacks on the Jews were connected with the revolutions and the civil war which took place in Eastern Europe during this period. At the end of 1917, pogroms had already occurred in the villages and towns within proximity of the war front. They were headed by groups of soldiers from the disintegrating czarist army, and consisted of unruly acts against Jews (mainly looting). Many pogroms of this type occurred in the Ukraine after its short-lived declaration of independence in 1918. Ostrovsky's work does not mention that the first pogroms to be accompanied by slaughter of Jews were perpetrated by units of the Red Army which retreated from the Ukraine in the spring of 1918 before the German army. These pogroms took place under the slogan "Strike at the bourgeoisie and the Jews." The Jewish communities of Novgorod-Severski and Glukhov in northern Ukraine were the most severely affected. However, "after a short period of confusion, the Soviets adopted harsh measures against pogromists found in the ranks of the Red Army. In addition to a fundamental and comprehensive information campaign, severe penalities were imposed not only on guilty individuals, who were executed, but also on complete army units, which were disbanded after their men had attacked Jews. Even though pogroms were still perpetrated after this, mainly by Ukrainian units of the Red Army at the time of its retreat from Poland (1920), in general, the Jews regarded the units of the Red Army as the only force which was able and willing to defend them. In the spring of 1919, at the time of the retreat of the Ukrainian Army before the Red Army which occupied Kiev, units of the Ukrainian Army carried out organized military pogroms in Berdichev, Zhitomir, and other towns. These pogroms reached their climax in the massacre at Proskurov on Feb. 15, 1919, when 1,700 Jews were done to death within a few hours. On the following day, a further 600 victims fell in the neighboring townlet of Felshtin (Gvardeiskoye).

Those responsible for these pogroms went unpunished, and henceforward the Ukrainian soldiers considered themselves free to spill Jewish blood. The Jews regarded Simon Petlyura, the prime minister of the Ukraine and commander of its forces, as responsible for these pogroms. The general chaos which reigned in the Ukraine in 1919 resulted in the formation of large and small bands of peasants who fought against the Red Army. The commanders (atamans) of these bands occasionally gained control of whole regions. The Jews in the villages, townlets, and towns there were constantly terrorized by the peasants, who extorted money ("contributions") and supplies from them or robbed and murdered them. These atamans included Angell, Kazakov, Kozyr-Zyrko, Struk, Volynets, Zeleny, Tutunik, and Shepel. The ataman Grigoryev, who in May 1919 seceded from the Red Army with his men, was responsible for pogroms in 40 communities and the deaths of about 6,000 Jews in the summer of 1919. He was killed by Ataman Makhno, who led a peasant rebellion in eastern Ukraine and endeavored to restrain his men from attacking the Jews. One of the most notorious pogroms carried out by the peasant bands was the one which occured in Trostyanets in May 1919, when over 400 people lost their lives. In the fall of 1919, there was a wave of pogroms committed by the counterrevolutionary White Army, under the command of General A.I. Denikin, in its advance from northern Caucasus into the heart of Russia. This army, which sought to restore the Czarist regime, proclaimed the slogan: "Strike at the Jews and save Russia." Its officers and soldiers made savage attacks on the Jews in every place which they occupied. The most sinister of these pogroms was in Fastov at the beginning of September 1919, in which about 1,500 Jewish men, women, and children were massacred. The soldiers of the White Army also perpetrated similar pogroms in other regions of Russia: in Siberia, where they were led by Admiral Kolchak and where the Cossack battalions of Baron R. Ungern-Sternberg gained notoriety for the systematic destruction of many communities in eastern Siberia and Mongolia; and in Belorussia, where Bulak-Balachowicz was in command in 1920. During 1920-21, when the Red Army gained control of Ukraine, the armed anti-Soviet bands still retained their full strength and the pogroms and brutalities against the Jews assumed a character of revenge, such as the massacre in Tetiev, in which about 4,000 Jews were put to death and the whole townlet was set on fire. The anti-Jewish movement set the total annihilation of the Jews as its objective and destroyed whole townlets. Only the military weakness of the attackers prevented a holocaust of Ukrainian Jewry.

During this period of pogroms, Jewish self-defense organizations were formed in many places throughout the Ukraine. The "Jewish Militia for War against Pogroms" of Odessa was renowned; it prevented pogroms in the largest community of Ukraine. Such groups were created in many towns and townlets but they were not always capable of withstanding military units or large armed bands. It was only after the consolidation of the Soviet regime that they received its support and played an important role in the suppression of the armed counter-revolutionary movement. It is difficult to assess the scope of the pogroms during the civil war years and the number of victims they claimed. Partial data are available for 530 communities in which 887 major pogroms and 349 minor pogroms occurred; there were 60,000 dead and several times that number of wounded (according to S. Dubnow). The pogroms of 1918-21 shocked East European Jewry, as well as world Jewry. On the one hand, they rallied many Jews to the Red Army and the Soviet regime; on the other, they strengthened the desire for the creation of a homeland for the Jewish people and a powerful and independent Jewish force. This aspiration found its expression in the Zionist movement, the He-Ḥalutz movement, and the Haganah in Erez Israel" (from Encyclopaedia Judaica). One of 5000 unnumbered copies.