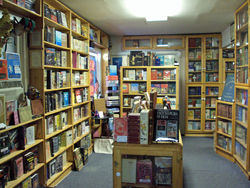 Walking down the famed Sunset Strip, one turns through an unexpected entryway, proceeds down a few stone steps, heads through a slim, magical passageway right out of old Europe, and is met with blooming flowerbeds fronting a charming English cottage reminiscent of Stratford-upon-Avon.

Inside, mellowed by soft, soothing sounds of gentle classical music, it’s a visitor-friendly as it is atmospheric and cozy; three rooms a virtual treasure trove of books – several thousand, every single one a true First Edition – immaculately organized, beautifully displayed.

This is Mystery Pier, the noted bookshop so regularly featured on TV (from Eye on L.A. to CBS Sunday Morning); in the In Flight magazines of Delta and Alaska Airlines; in the Louis Vuitton Guide; in the major national entertainment magazines (from Best of the Best edition of Los Angeles magazine to the cover story in an issue of Money magazine); and Number One in the Ten Best Hidden Gems of L.A.

Owned and operated by the hospitable, knowledgeable father-and-son team of Harvey Jason and his son Louis M. Jason, Mystery Pier is embraced not only for the warm friendliness and helpful expertise of its proprietors, but for its extraordinary selection of titles, with the strongest emphasis placed upon quality, scarcity and value.

All items are accurately described, thus all sales final.