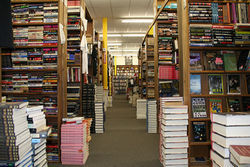 A bookseller since 1980 and online since 1997, Wonder Book is passionate about books, whether used mass markets, five-figure rare collectibles, or new publisher's overstocks. A member of ABAA and ILAB, Wonder Book believes that books are not made to be disposed of—they are made to be read, collected, shared, and displayed. In addition to books, Wonder Book sells movies, music, video games, and more. Wonder Book's Frederick and Hagerstown retail stores also rent movies and video games.

With over 4 million books, Wonder Book operates 3 large retail stores in the Baltimore-Washington Metropolitan Area and a 72,000 square foot warehouse for Internet, bulk, designer, and export sales. Our retail stores were recognized by USAToday in 2002 as "1 of 10 Great Old Bookstores". Our Internet warehouse was featured as a model for the changing book industry by The Washington Post in 2008 and C-Span in 2009. Our Books by the Foot service, where we sell books in bulk as decoration, props, and instant libraries, was featured by The New York Times in 2011.

RETURNS are cheerfully accepted up to 30 days. We ship out within 1-2 business days and U.S. Standard Shipments usually arrive within 6-9 business days, Priority 3-6.