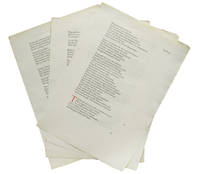 4 single leaves and one conjugate leaf, from the Doves Press Bible from the Book... 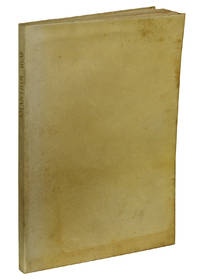 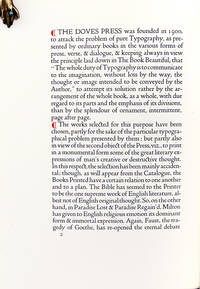 Catalogue Raisonné of Books Printed & Published at the Doves Press, 1900-1911 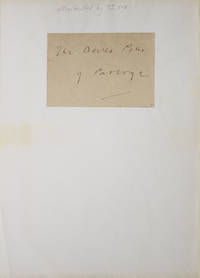 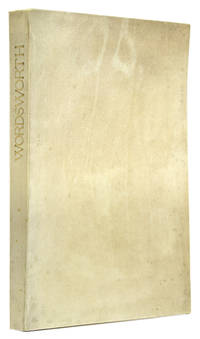 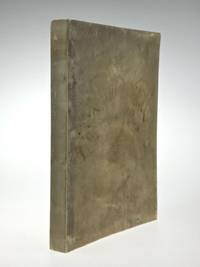 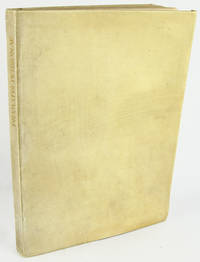 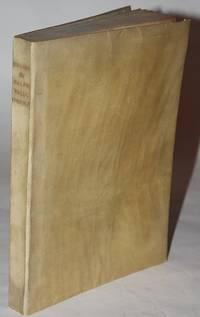 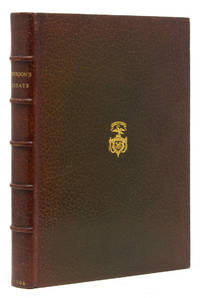 Essays...with a Preface by Thomas Carlyle

The recent news that typeface designer Robert Green -- who produced a digitized version of the classic Doves Type in 2013 -- had recovered over 150 of the original lead punches from the River Thames has caught the imagination of literary and rare-book circles, and spurred many articles on the Doves Press and the visionary book binder and printer Thomas Cobden-Sanderson.

What was the Doves Press?

In 1900, recovering-lawyer-turned-bookbinder Thomas Cobden-Sanderson founded the Doves Press in partnership with entrepreneur Emery Walker. Both men were part of the Arts & Crafts Movement associated with William Morris, who had earlier founded the Kelmscott Press -- for which Cobden-Sanderson did the binding. While the Kelmscott Press sought to produce the most beautiful and ornate books, the Doves Press strove for elegance and clarity. (I suspect that today, Cobden-Sanderson would design things for Apple). Philip C. Salmon of Bromer Booksellers says, “the thing that defines Cobden-Sanderson is the exacting nature of his craftsmanship, which is very evident in his bindings, and in the very precise nature of his page arrangements.” In pursuit of this clarity and elegance, Walker and Cobden-Sanderson designed a distinctive typeface, now known as “Doves,” in which all their books were set.

The Dispute Over Doves Type

By 1909, Cobden-Sanderson and Walker simply couldn’t work together any longer, and the business broke up in a contentious dispute over the future use of the type. Cobden-Sanderson would not countenance his type being used by others, but Walker saw the type as a valuable asset. Their dispute culminated in Cobden-Sanderson’s now-legendary destruction of the Doves type and matrices (the molds for making more punches) by throwing them into the River Thames in secret over the course of many months in late 1916 and early 1917. Without the matrices, no more punches could be made, so the type was gone. (The Economist on "The Fight Over the Doves"...)

The Recovery of the Doves Type

British typeface designer Robert Green spent years recreating and expanding (after all, there was no call for @ or € symbols in 1900) the type from books printed by the press, before launching a digital font, “Doves,” in 2013. While engaged on this project, he spent a lot of time analyzing Cobden-Sanderson’s journals and working with his biographer to pinpoint the likely spot where Sanderson “bequeathed” the type to the Thames. Once he identified the location, he took a walk along the river bed at low tide, and was astonished to find a handful of punches. After getting professional divers involved in the search, he eventually recovered over 150 original punches.  (Read more about the recovery effort...)

It’s interesting that the story of the type’s recovery from its watery grave has struck a chord with bibliophiles at this moment in time; with graphic design and computers having long replaced setting type by hand, the western world is rediscovering a love of the handmade, artisanal production, and the book as a physical object. So, the story of one man’s visionary pursuit of an artistic ideal and his attempt to ensure nobody else could benefit from his creation holds great appeal in a world tired of social sharing and the culture of consumption.

For collectors, a few might aspire to own a copy of one of the Doves Press signature titles, but they can be price prohibitive for most. However, there are other works from the press that showcase the same typeset and Cobden-Sanderson’s attention to detail, including some essays by Cobden-Sanderson himself, which are fascinating and affordable. Individual pages or signatures from the Doves Press Bible (possibly printed as specimens and passed out to subscribers, employees, or prospective subscribers as advertising) are also an affordable way to add examples of Doves Press’ artistry to your collection.

For anyone wishing to know more about the colorful history of the Doves Press, Oak Knoll Press, the publishing arm of ABAA member Oak Knoll Books, has published two definitive books on the Doves Press and the Doves Bindery, both researched and written by Marianne Tidcombe, author of The Bookbindings of T.J. Cobden-Sanderson.

The Doves Press by Marianne Tidcombe

This highly-researched work is the most authoritative account of the first and most famous private press of the 20th century - the Doves Press. Starting its operation in the wake of William Morris, the Doves Press became a major influence in the development of modern book design. Marianne Tidcombe reveals the intriguing story of the cutting of the famous Doves Type, the printing of Paradise Lost, Paradise Regained, and The English Bible. Also included is the saga of Cobden-Sanderson's short and stormy partnership with Emery Walker. Recounted in detail, this blusterous relationship ultimately lead to a final episode where Cobden-Sanderson throws the Doves type into the River Thames to prevent it from falling into Walker's hands after his death.

The Doves Bindery by Marianne Tidcombe

This famous bindery was founded by T.J. Cobden-Sanderson in 1893 and over a period of 30 years it produced some of the finest bookbindings ever conceived. In its early years the bindery shared premises with William Morris's Kelmscott Press. The consequent collaboration resulted in a series of richly-decorated copies of the Kelmscott Chaucer. Later on the majority of the bindery's work was for the Doves Press, which Cobden-Sanderson founded with Emery Walker in 1900. Dr. Tidcombe's comprehensive work provides a detailed history of the Bindery and includes a complete catalogue of the books produced, over 120 of which are described in full and illustrated.

Anyone interested in typefaces or typeface design might be interested in this short article by ABAA member Tom Nealon of Pazzo Books on Jenson’s Roman, a key inspiration for Doves Type.