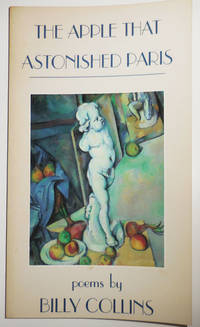 Miegan Gordon of Asheville, NC’s Captain’s Bookshelf got a surprise last month when she opened the store. A copy of Billy Collins’ poetry collection Nine Horses (a signed first edition, no less) was looking a little worse for wear. It was full of holes punched from front to back, and the author photo had been altered to make Collins look like a silent movie villain, complete with curling mustaches, goatee and an evil-looking eyebrows.

At first, the store staff wondered if somebody had hacked at it with an ice pick. But, after local police stopped by to compile a report, the officers recognized what had actually happened to the book: it had been blasted with a shotgun, probably a .410, they remarked.

The damage is most apparent from the spine view.

Asheville is where I make my home, so I popped over to the Captain’s Bookshelf to view this now-unique collectible -- with the words of Collins’ poem “Building with its Face Blown Off” rattling around in my head: “How suddenly the private is revealed in a bombed-out city.” Does blasting a book apart make it easier to access the poetry inside? -- and heard the full story from owner Chan Gordon.

From the code number inside the book, Gordon was able to determine that he bought the book about two years ago. What happened next is a mystery. Gordon feels a signed first edition of Billy Collins would not have sat on the shelf unsold for two years, so presumably the book was bought (or prehaps stolen) within that time, and recently returned surreptitiously -- as there was no sign of a break in -- to the store after the critic expressed their opinion with the shotgun.

Gordon expressed bemusement as to the motivation of the critic, both as to the reason to blast the book apart and the reason to return the copy to the store. (If a book is blasted apart and no one watches, did it really happen?) He remarked that this is the most bizarre thing that he’s come across in his years in the book trade.

Hannah Callahan and Chan Gordon of Captain's Bookshelf, with the disfigured copy of Nine Horses

The best theory the Captain’s Bookshelf staff can come up with is that Collins judged a local poetry competition last year, so the shotgun-wielding critic may have been one of the unsuccessful entrants. Then again, Richard Ford once expressed his displeasure at a review of The Sportswriter by shooting one of reviewer Alice Hoffman’s books and mailing it to her. So, perhaps the mystery gunman is merely following Ford’s example?

Asked whether this particular volume is now more valuable, Gordon observed that "It's certainly a one-of-a-kind, highly-unusual copy." But, perhaps any change in value will depend on the identify of the gunman, if it’s ever discovered…

An article from the Asheville Citizen-Times about the discovery...