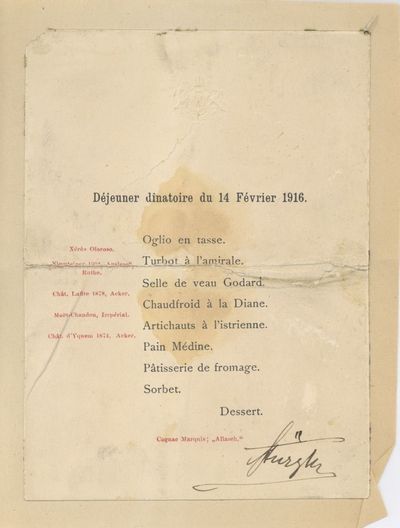 by [Menu - Imperial Court of Austria]; The Prime Minister of Austria Hungary, Count Carl Sturgkh
[Vienna, Austria], 1916. Single leaf menu, (16.5 x 12 cm.), pasted onto a card backing. The menu bears the blind-stamped armorial crest of Austria Hungary. The Prime Minister Carl Graf Sturgkh, was an arch-conservative, and at this was ruling alone, having dissolved both the provincial assembly, and the Austrian Rechstrat. Eight months after this meal, Sturgkh was assassinated. The meal is somewhat simple and elegant: Oglio en tasse, turbot a l'amirale, selle de veau Godard, Chaudfroid a la Diane, Artichauts a l'istrienne, Pain Médine, patisserie de fromage, sorbet, and dessert. The wines are exceptional, as would be expected: Xéres Oloroso, Niersteiner 1904 Auslesse Ruthe, Chat. Lafitte 1878 Acker, Moet-Chandon Imperial, and Chat d'Yquem 1974 Acker. All followed by a Cognac Marquis or "Allasch"(a fine kummel). Also included is a clipping from the Wiener Bilder, with a photograph of Sturgkh, pasted onto a sheet of card. The menu has been folded, is worn at the folds, and is somewhat soiled; one corner is chipped. Good. Signed by Strugkh in the lower right hand corner. (Inventory #: 5551)
$250.00 add to cart or Buy Direct from
Rabelais: Thought for Food
Share this item

The Art of Hungarian Cooking