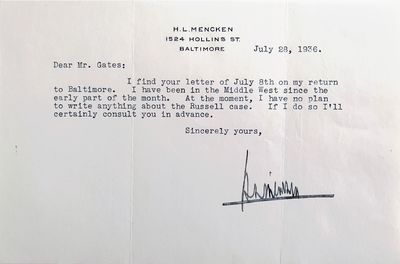 by MENCKEN, H.L. [Henry Louis] (1880-1956).
Baltimore,: 1936-42., 1936. 8 1/2 x 5 1/2 inches (each). Gates was an Abraham Lincoln enthusiast, poet, author, and became a scholar of Civil War and Lincoln history. He was an officer of the New York City Civil War Round Table. These letters are all addressed to Arnold Gates and cover a variety of subjects. The tone is friendly, but terse. Both followed and perhaps donated to a prisoner named Joseph Russell, who was first a robber and then a forger and plagiarist. Mencken and Gates occasionally are light-hearted, such as M’s thoughts on persons born in September (including himself, naturally). He declines membership to the Roughriders Club "I have a set rule against joining anything." One letter addresses the abdication of Edward VIII. Another makes disparaging remarks about Gertrude Stein and T.S. Eliot. "H.L. Mencken (1880-1956), journalist, author and critic, worked as a reporter and drama critic for the Baltimore Morning Herald from 1899 to 1906. From 1906 to the end of his working career he was at the Baltimore Evening Sun where he wrote the column "Free Lance" in which he expressed his views on literature, politics and society. He was book review editor for the magazine Smart Set from 1908 to 1924 when he started a new magazine, American Mercury, a journal of sociology and politics. He retired from American Mercury in 1933 and concentrated on writing for the Baltimore Sun and encouraging young literary talent. He also wrote books and articles including his classic, The American Language, which he first published in 1918 and continued revising until 1948." - NYPL. See: S. T. Joshi, H.L. Mencken: An Annotated Bibliography, Scarecrow Press, 2009. Full description available on request. (Inventory #: LV2307)
$3,000.00 add to cart Available from
Jeff Weber Rare Books
Share this item

Hints on Shooting and Fishing, &c. Both on sea and land....