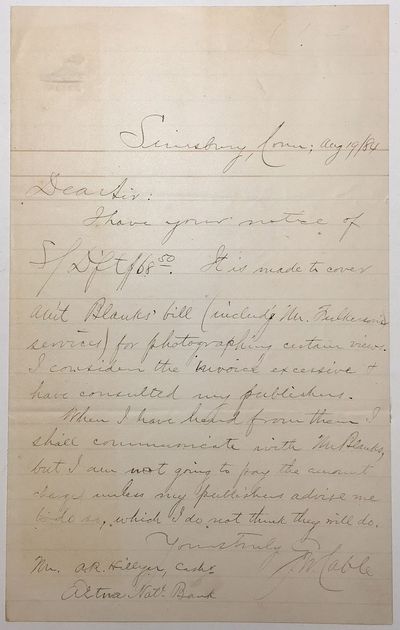 by CABLE, George Washington (1844 - 1825)
Simsbury, CT, 1884. unbound. very good. 1 page, 8 x 5 inches, Simsbury, Connecticut, August 19, 1884, contesting a bill for photography, in full: "I have your notice of due draft $68.50. It is made to cover amount Blanks' bill (including Mr. Fulkerson's services) for photographing certain views. I consider the invoice excessive and have consulted my publishers. When I have heard from them I shall communicate with Mr. Blanks, but I am not going to pay the current charge unless my publishers advise me to do so, which I do not think they will do." *In the 1980s a series of letters by Cable came to market via Charles Hamilton whereby the author had established a precedent for not paying various bills due to his dissatisfaction, i.e. the hotel room was damp, the meal was tasteless, the engravings were poorly executed, etc. Faint uneven toning, but still in very good condition. American author who served in the Confederate Army and later became one of the dominant voices of Southern life, especially in Louisiana. (Inventory #: 278718)
$100.00 add to cart or Buy Direct from
Argosy Book Store
Share this item

New York : W.E.B. Dubois Clubs of America , 1968
(click for more details about Columbia, Inc)
View all from this seller>