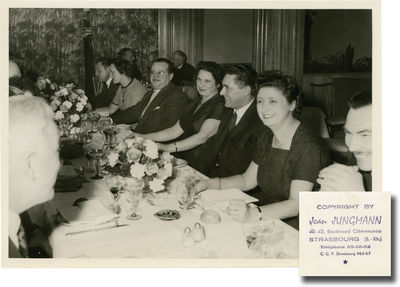 by Albert Lamorisse (director, screenwriter, producer); Jean Jungmann (photographer); Andre Gille, Maurice Baquet, Pascal Lamorisse, Jack Lemon, Ole Neumann (starring)
Strasbourg, France: Jean Jungmann, 1960. Archive of 5 vintage single weight press photographs from a press gala for the 1960 French film, here under the original French title. All rubber-stamped on the verso, crediting photographer Jungmann, and all but one show director Lamorisse on-stage behind a microphone with an official from the gala, with one photo featuring smiling colleagues seated at a dining table. Housed in an original Jungmann mailing envelope, addressed to Maryse Martres in holograph ink, with a memo on Cinedis parchment from "F. Willkomm," signed by him in holograph ink, and dated December 30, 1960, noting that the images portray Lamorisse while he visited Strasbourg for the gala. Also included is a carbon typescript letter from Martres to Lamorisse, citing the inclusion of travel tickets to Strasbourg and Marseilles, and various press events to occur. A welcome addition to the director's mostly unseen oeuvre.

Little is known of Willkomm, but the memo does bear his rubber-stamp, crediting him as the Cinedis director of the Strasbourg location. Martres (Martin) was a prolific French actress since 1948, notably "Girl on the Third Floor" (1955) and "The Happy Road" (1957), and she was later involved in press relations at Cinedis, a notable film agency in operation since the Silent Film era. Kishi was born in 1932 and became a Japanese actress and writer. She married director Ciampi in 1957. Since 1996 she has been a Goodwill Ambassador for the United Nations Population Fund (UNFPA). Photographer Jungmann is equally obscure, but seems to have been prolific in the 1960s, mostly for press relations.

Director Lamorisse starred his own son, Pascal, as a boy who stows away on his grandfather's (Gille) hot-air balloon that is less controllable than suspected. They narrowly escape church spires, and snag clotheslines and party guests, Pascal enjoying every minute. Lemmon narrated the English version, and subsequently bought the rights to the film. Winner of an OCIC Award at the 1960 Venice Film Festival.