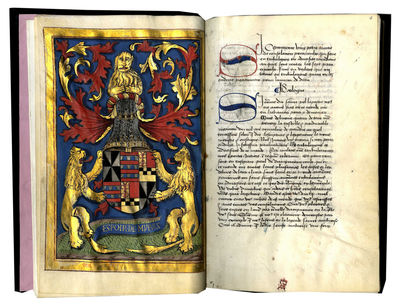 by [ANONYMOUS], Les sept fruits de la tribulation;
ELEGANT MANUSCRIPT CONTAINING TWO WORKS OF SPIRITUAL AND MORAL EDIFICATION IN FRENCH TRANSLATION. Illuminated manuscript on parchment, in French, France, after 1482, c. 1490. Dimensions 274 x 175 mm. 70 folios, written in a Gothic bâtarde bookhand, 18 large initials parti-colored in red and/or blue, inserted leaf in first quire with FULL-PAGE HERALDIC COMPOSITION IN GOLD, SILVER, RED, BLUE AND BLACK. BINDING: Bound in modern nineteenth-century blue velvet over wooden boards, pink paper pastedowns and endleaves, edges gilt. TEXT: Manuscript contains two works that reflect the spirituality of fifteenth-century Carthusians and their quest for the contemplative life. The first text, Sept fruits de la tribulation, is known in only five extant manuscript and is still unedited. A free French version, probably dating from the fifteenth century, of either the longer Latin Tractatus de tribulacione, or an abridged adaptation of the French Livre de tribulacion. The second text, Miroir d'or de l'ame pecheresse, is a work of spiritual edification which consists of seven sections: on human misery, sin (especially lechery), penance, rejection of the world, the vanity of human wishes, death and hell and heaven. There is neither a modern critical edition of the second text, nor a complete census of the existing manuscripts; the copy here was apparently made from an incunable edition of c. 1490. This manuscript begins with a remarkable added full-page illuminated frontispiece with the coat of arms and motto of Louis de Grolée (fl. late fifteenth-early sixteenth century), the abbot of Bonnevaux and Saint-Pierre de Vienne. PROVENANCE: Copied in France (perhaps northeastern?) based on script and linguistic characteristics, as well as internal evidence. It belonged to Louis de Grolée (fl. late fifteenth-early sixteenth century). It then belonged Charles Chardin, bibliophile. It was later a part of the collection of Sir Thomas Phillipps, (1792-1872), who has been described as the greatest private manuscript collector of all time. CONDITION: Gold slightly rubbed, some off-setting from heraldic painted composition to opening text page, slight staining in upper margin and into three lines of text ff. 68-69. Overall good condition. Full description and pictures available. (TM 466) (Inventory #: TM 466)
$98,000.00 add to cart Available from
Les Enluminures, Ltd.
Share this item
Les Enluminures, Ltd.
Offered by

Paris, Germain Hardouyn, c. 1534 (almanac for 1534-1546)
(click for more details about Printed Book of Hours (Use of Rome); in Latin and French, illuminated imprint on parchment)

De claustro animae (On the Cloister of the Soul); in Latin, decorated manuscript on parchment

Northern Italy (Venice?), c. 1230-1240
(click for more details about De claustro animae (On the Cloister of the Soul); in Latin, decorated manuscript on parchment)
View all from this seller>