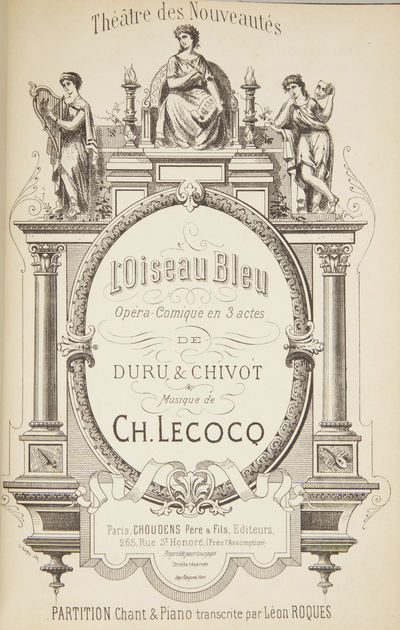 L'oiseau bleu, to a libretto by Duru and Chivot, was first performed in Paris at the Nouveautés on 16 January 1884.

"Much of Lecocq's music is characterized by a light touch, but he could also adopt a more lyrical and elevated style than Offenbach and termed several of his operettas opéras comiques. His greatest popular triumph, La fille de Madame Angot, has remained a classic among operettas, and demonstrates Lecocq's abundant flow of pleasing melodies, his deft exploitation of rhythm for a lively theatrical effect, impressive building up of extended numbers, and typically French shaping of phrases." Andrew Lamb in Grove Music Online. (Inventory #: 28434)
$86.00 add to cart or Buy Direct from
J & J Lubrano Music Antiquarians
Share this item

Signed photograph of the noted American violinist and music educator

Before the Ballet. Drypoint by noted German Impressionist painter and etcher Ernst Oppler (1867-1929)

1915
(click for more details about Before the Ballet. Drypoint by noted German Impressionist painter and etcher Ernst Oppler (1867-1929))
View all from this seller>