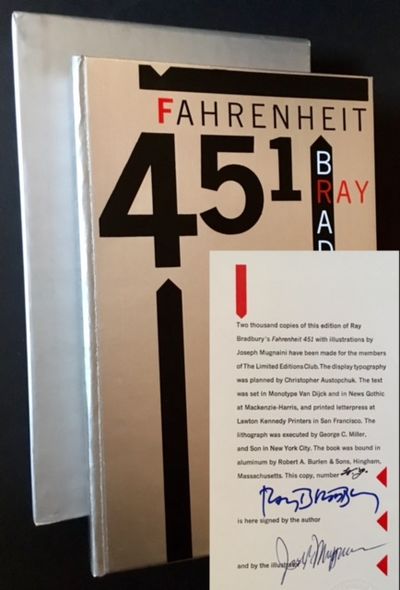 by Ray Bradbury
New York: The Limited Editions Club, 1982. Hardcover. Near Fine. Joseph Mugnaini. One of the scarcest of all copies within the limitation of the 2,000 copies signed by both Ray Bradbury and the illustrator Joe Mugnaini. This is a "lettered" copy (letter 'G') and, just below the signatures at the limitation, states in blindstamp: "ONE OF 26 PRESENTATION COPIES, OUT OF SERIES". One can certainly assume that almost all of these Presentation copies were given to close friends and family of Bradbury, Mugnaini and the publisher, and that very few of these "lettered" copies reached the market. This is a very sharp copy to boot. Clean and easily Near Fine in its aluminum boards, with both the cautionary slip ("Fragile: This Book Is Bound in Aluminum -- Sensitive to the touch") and the Monthly Letter of the Limited Editions Club laid-in. Quarto, nicely illustrated thuout by Mugnaini. Also includes a handsome, very sturdy example of the matching aluminum slipcase, with just a touch of very faint rubbing at the panels. (Inventory #: 16267)
$2500.00 add to cart or Buy Direct from Appledore Books
Share this item
Appledore Books
Offered by

The River at Green Knowe