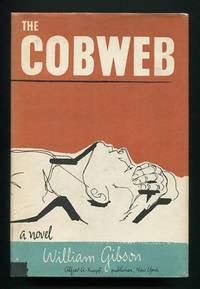 by Gibson, William
New York: Alfred A. Knopf. Near Fine in Near Fine dj. 1954. First Edition. Hardcover. [slight bumping to several corners, otherwise a nice tight clean copy; jacket lightly scuffed along spine, minor wear at corners (corresponding to bumped corners of book), tiny bit of smudging on front panel]. INSCRIBED ("To _____ ______") and SIGNED by the author on the ffep. The noted playwright's first and only novel, set in a psychiatric institution strongly resembling the Menninger Clinic in Topeka, Kansas -- which is not the least bit coincidental, given that his wife, Margaret Brennan-Gibson, was herself a renowned psychologist and psychoanalyst who had interned at Menninger in the early 1940s. (She went on to a quite distinguished career, eventually ending up on the faculty at Harvard.) Gibson was a bit of a late-bloomer: he was nearly 40 when the book was published, and its success (including the sale of the movie rights to MGM) was no doubt, as Ruth Gordon said when she won her Oscar for HAROLD AND MAUDE, very encouragin' -- but he was a dramatist at heart, and by the late 1950s had firmly established himself as such with the Broadway hits "The Miracle Worker" and "Two for the Seesaw." (The film adaptation of "The Cobweb," by the way, was directed by Vincente Minnelli and starred Richard Widmark, Lauren Bacall, and Charles Boyer. But I'll bet you knew that.) Signed by Author . (Inventory #: 24557)
$75.00 add to cart Available from ReadInk
Share this item
ReadInk
Offered by