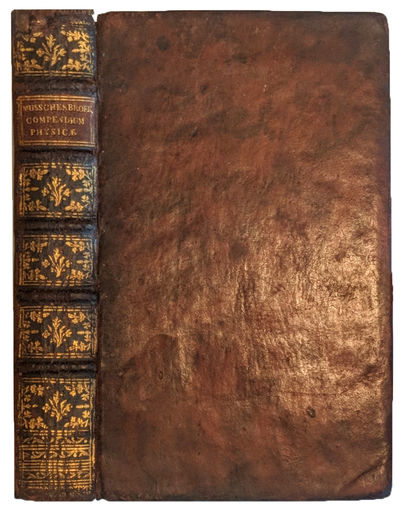 by MUSSCHENBROEK, Petrus van (1692-1761); Johan LULOFS (1711-1768).
Lugduni Batavorum:: Apud S. et J. Luchtmans, 1762., 1762. 8vo. [iv], 515, [1] pp. 14 folding plates, woodcut title vignette. Contemporary full mottled calf, gilt-decorated spine, leather gilt-stamped spine label, raised bands; minor dampstain to lower edge (text block unaffected), spine head and joints worn. Ownership mark of Stephani . . ." Very good. The "final update" of Musschenbroek's popular textbook, which appeared posthumously in 1762. Musschenbroek was best known as the inventor of the Leyden Jar, the original capacitor/battery. He published numerous books during his lifetime, most of them taken from his lectures on natural philosophy, mathematics, and physics. This volume, published posthumously, is thought to have been written in part by its editor, Johannes Lulofs, a former student of 's Gravesande, who was chief inspector of rivers in Holland. / "Edited by John Lulofs, this collection of some of Musschenbroek's famous lecture notes was published a year after he died. Lulofs was a colleague of Musschenbroek at Leyden, and, although primarily on physics, chemical topics are discussed: e.g., metals, fire and combustion, and luminescence and phosphorescence." - Roy G. Neville, Historical Chemical Library. / This work includes chapters on Sound, Air, Gravity, Meteors, and the Attraction of Bodies. "The similarity of the structure and content between Di Martino's and Musschenbroek's texts and their differences from the Principia [of Newton] is undoubtedly due to their difference purposes. As can be seen from their titles, Newton's aim is to explain the mathematical principles of natural philosophy, whereas Di Martino and Musschenbroek wish to provide students with the information necessary to learn about natural philosophy. Their greater breadth of topics, as well as their discursive treatment, reflects their different functions: first, to bring together a wide and inclusive view of all objects of natural philosophy; and, secondly, to make accessible to all, especially to students." – Elizabethanne A. Boran, Mordechai Feingold (eds.), Reading Newton in Early Modern Europe, Leiden: Brill, 2017. / In the United States the Leiden jar (or Leyden jar) "was also humorously called the 'shock-bottle.' . . . the invention was widely appreciated for its great versatility in experimenting with electricity. Benjamin Franklin was enthusiastic about 'Musschenbroek's wonderful bottle.'" – Krehl, p. 241. REFERENCES: Baaken, p. 89; Neville, II, p. 205; Partington, IV, 405; Poggendorf, II, 1244-1245; Ronalds p. 360. See also: Peter O. K. Krehl, History of Shock Waves, Explosions and Impact: A Chronological and Biographical Reference, Springer, 2008. (Inventory #: SW1572)
$1,200.00 add to cart Available from
Jeff Weber Rare Books
Share this item

A Life of Matthew Fontaine Maury, U.S.N. and C.S.N. author of 'Physical Geography of the Sea and its Meteorology.' Compiled by his daughter . . .

Turning and Mechanical Manipulation. Intended as a work of general reference and practical instruction, on the lathe, and the various mechanical pursuits followed by amateurs.

London: : Published for the author, by Holtzapffel & Co., . . . 1843, 1846, 1850, 1878, 1884. , 1843
(click for more details about Turning and Mechanical Manipulation. Intended as a work of general reference and practical instruction, on the lathe, and the various mechanical pursuits followed by amateurs.)
View all from this seller>