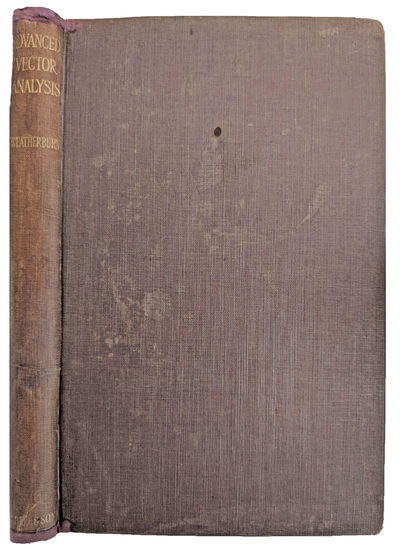 by WEATHERBURN, Charles Ernest (1884-1974).
London:: G. Bell, 1924., 1924. 8vo. xiv, [2], 222 pp. 36 figs. Brown gilt-stamped cloth; , soiled, spine repaired with kozo. With the ownership signature of [Professor] A. H. Wilson, Haverford College, [1932?]. [Hand-written note: "F.W. Weston owned this book. . . " – with his faded signature, April 1926. Good. Weatherburn was an Australian mathematician. "In 1923 was appointed chair of mathematics in Canterbury College, University of New Zealand. He returned to Australia in 1929 as chair of mathematics at the University of Western Australia, a post he held until he retired in 1950." – Wikip. PROVENANCE: Professor of mathematics, Albert Harris Wilson, Haverford College, PA, was educated at Vanderbilt University and the University of Chicago. (Inventory #: RW1273)
$50.00 add to cart Available from
Jeff Weber Rare Books
Share this item