Alone Across the Top of the World; The Authorized Story of the Arctic Journey of David Irwin [Forward by Russell Owen] [from the Steve Fossett collection] 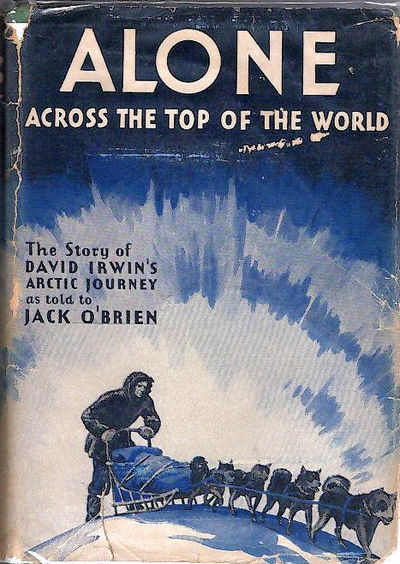 by Irwin, David and Jack O'Brien
Chicago: The John C. Winston Company, 1935. First Edition. Near Fine/Very Good. Inscribed by David Irwin, [8.75x6.25in]; x, 254 pp., frontispiece image of David Irwin, 14 plates of 16 black and white images; Green cloth covers with black ink lettering and illustration of dog sled team on front, gilt lettering on spine; Arctic maps and routes on end papers, all edges trimmed; Dark blue dust jacket with white and black lettering on front and spine, illustration of dog sled team and aurora on a globe, image and Irwin biography on back; Minimal shelf wear, back hinge loose; Some shelf wear to dust jacket with chips and closed tears along edges and corners, top and bottom of spine chipped with minor loss of text, long repaired split along front and back spine, some soiling and rubbing to covers and spine, spine slightly darken, inscription on frontispiece by Irwin "To Barney McEntire - The best of pilots & men - Sincerely Your Arctic Friend - David Irwin", tipped in folded plain paper with pencil note to Barney, bookplate of Steve Fossett on front end paper. [Arctic Biblio 12644]. David Irwin (1910-1970) was an American adventurer, explorer and world traveler. This book is about his story of a three year 3,600 mile trek alone in the Arctic to the magnetic North Pole. From the dust jacket, "He had two distinct objectives: prospecting the Coppermine District and searching for the records of the Franklin Expedition on King William Island." He later became a promoter of Eskimo culture and set up Arctic weather stations for the Army.

Steve Fossett (1944-2007) was a successful commodities trader and an adventurer that set world records in balloons, sailboats, gliders and unique powered aircraft. His 2,000 + book collection included significant and authoritative accounts of aeronautics, polar, Asia, Australasia, circumnavigation's, mountaineering and others. In 2007, Fossett disappeared on a solo flight in a light aircraft over the eastern Sierra Mountains along the California and Nevada border. The wreckage was found by hikers a year later along the rugged Mt. Ritter range in the Ansel Adams Wilderness in Madera County, about 10 miles east of Yosemite National Park. (Inventory #: 13644)
$90.00 add to cart Available from
David Spilman Fine Books
Share this item

To the North Magnetic Pole and Through the North-West Passage; [Geographic Journal, May 1907, Vol. XXIX No. 5]

London : Royal Geographic Society , 1907
(click for more details about To the North Magnetic Pole and Through the North-West Passage; [Geographic Journal, May 1907, Vol. XXIX No. 5])

Oakland, CA : University of California Press , 2018
(click for more details about Carleton Watkins; Making the West American [all images by Carlton Watkins (1829-1916))
View all from this seller>