Dolaeus upon the cure of the gout by milk-diet. To which is prefixed, an essay upon diet. By William Stephens, M.D.F.R.S. Fellow of the King and Queen's College of Physicians in Ireland, Physician to the Royal Hospital, and Botany Lecturer in the University of Dublin. 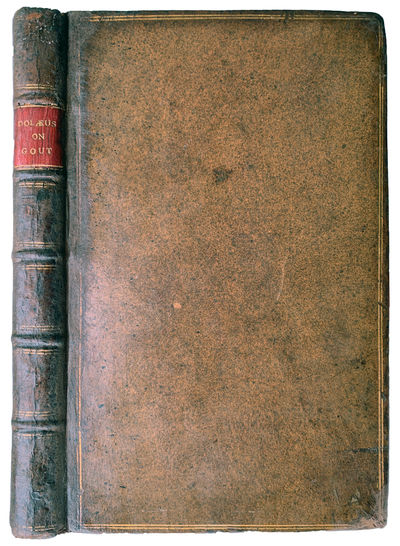 8vo. [8], vii, [1], 182, [iv] pp. Woodcut initials, head- and tailpieces, publisher's ads., errata. Original full speckled calf, double-gilt ruled covers, five raised bands, red morocco gilt-stamped title label; kozo repairs to joints and corners. Ink inscription "York 1787". Later signature of "H. Conyers Smith[']" (obscured); sticker at rear pastedown "H.C.S." Fine. Scarce. FIRST EDITION IN ENGLISH, originally published in 1707 as Tractatus novus de furia podagrae lacte victa & mitigata. The author points to diet as a direction for treating gout as "the application of medicines hath proved ineffectual." Specifically he supports drinking milk as a therapeutic agent against gout. This work is produced in two parts, the first being Stephens' essay on diet related to gout, and the second being his translation of Dolaeus' account, including a history of other cures. He starts with mentioning that Celsus recommended the use of milk to avoid "this distemper" (page 72), as well as abstaining from the drink of wine for a full year. He then refers to several others (John George Grezzell, James Sacks, "Waldsmid", and Monsieur de Collet), each supporting milk.

Sinclair states that milk is "highly beneficial" to the improvement of health when effected by gout. He claims it has "almost a certainty of success" [his own italics]. Dolaeus considered milk as the best medicine yet discovered for the stone. -- John Sinclair, The Code of Health and Longevity: Or, A General View of the Rules. . . , London, 1844.

Note: The author opens the text citing Isaac Newton's Opticks, p. 350, 360. These passages refer to "putrefaction" found in all living things, being "composed of substances volatile and fixed, fluid and solid. . . "

William Stephens, studied medicine at Leiden under Hermann Boerhaave, who sponsored his thesis (1718), in 1725 helped set up the second physic garden (behind the anatomy theatre) at Trinity College Dublin, where is taught chemistry, joined the Irish Royal College of Physicians (1718), serving as President three times (1733, 1742 and 1759). He was elected Governor of Dr. Steevens' Hospital in 1743, later succeeding Francis Le Hunte as 'Physician' to that hospital. He also wrote, Botanical Elements, Dublin, 1727. (Inventory #: M13712)
$850.00 add to cart Available from
Jeff Weber Rare Books
Share this item

The Works of Lord Byron. Including the suppressed poems.

Paris: : A. and W. Galignani, 1826. , 1826
(click for more details about The Works of Lord Byron. Including the suppressed poems.)
View all from this seller>