Merchants from the South and West would be amply recompensed by making Cheap Purchases for CASH, by calling at Carpet Hall, Oil Cloht, and Windo Shade Depot. . 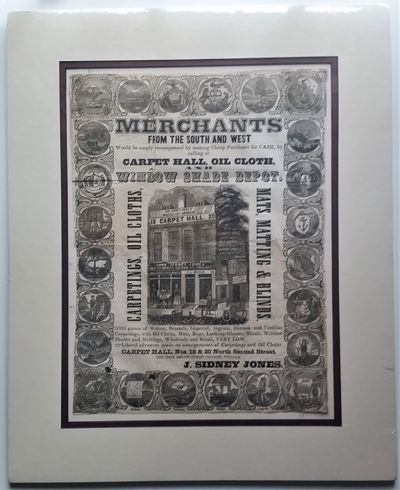 by J[ohn] Sidney Jones
Philadelphia, 1835. Folio broadside. 360 x 265 mm. (14 ¼ x 10 ½ inches). Illustrated at center with a woodcut of the Carpet Hall by N. Johnson and with circular emblems of the 24 States of the Union arrayed as a border cut by Pease. Trimmed to the image margins, with outer border removed, slightly affecting a few state names on the left side; repaired at the center fold tiny hole above one letter of the title. Matted. Rare illustrated sales broadside for Carpet Hall, with "3000 pieces of Wilton, Brussels, Imperial, Ingrain, Damask and Venitian Carpetings [sic]" on sale. Jones' establishment was located at Carpet Hall, 18 & 20 North Second Street, one door below Christ Church. In his research on the textile trade in Philadelphia Philip Scranton writes that Jones ran a factory on South Street in the 1850's that produced carpet yarn for handloom weaving that was marketed through his showroom at Carpet Hall. Jones seems to have quite a long career as he is listed at Second Street address in the McElroy's Philadelphia City Directory of 1835 and again in Gopsill's Directory of 1869 with the address of 147 South Street. The wood engraver, Neville Johnson cut a handsome image of the Hall and he along with the woodcutter Pease, who cut the state seals, produced a very attractive broadside advertising Jones' carpeting and oil cloth business. The date of this broadside is unclear because of the trimmed margins and loss of any publication information. I have been unable to locate another copy of the broadside. Sinclair Hamilton lists Neville Johnson's work as being done in Philadelphia in the 1840's. But given the design characteristics and the twenty-four state emblems that appear as a boarder around the advertisement I have given the date of ca. 1835. This is because in 1836 Arkansas was admitted to the Union as the twenty-fifth state and in 1837 Michigan was admitted. I expect that these two states would have been included in the border work if the broadside had been printed later. The twenty-seventh and twenty-eight states was not admitted until 1845 when Florida and Texas were voted in. Not cited in OCLC, or online catalogues at Library Company, American Philosophical Society, Free Library of Philadelphia, University of Delaware and Winterthur. Philip Scranton. Proprietary Capitalism: The Textile Manufacture at Philadelphia, 1800-1885. Cambridge UP, 1983, p. 209. For a notice on the wood engraver Neville Johnson see Hamilton, Early American Book Illustrators and Wood Engravers 1670-1870, no. 333. (344). (Inventory #: 346)
$700.00 add to cart Available from
De Simone Company
Share this item
De Simone Company, Booksellers
Offered by